Part 2: Replicants of the Reef

On a rocky stretch of coastline on Hawaii’s Big Island a group of marine biologists are studying the lifecycle of the octopus - a creature that lives fast and dies young.
Richard Pendavingh   May. 10, 2020 05:50 pm 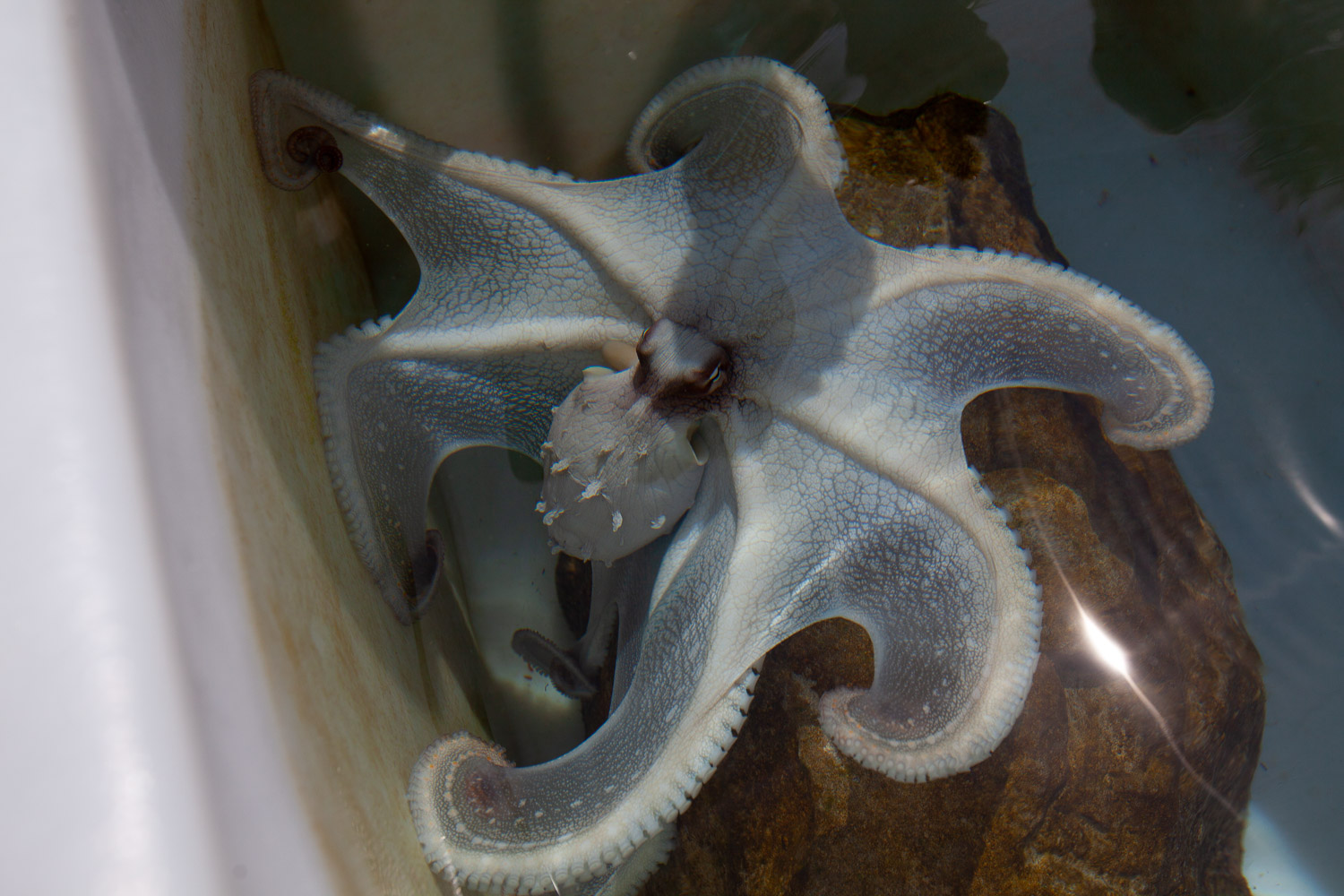 Octopus use specialised skin cells called chromatophores to change colour. These cells also allow them to make changes to the opacity and reflectivity of their body. The shifts can take place in a fraction of a second.

Maggie Wong, a research assistant at the Kanaloa Octopus Farm, took us on a tour of the lab. Directing us towards a set of large plastic tanks she had us wait quietly with our fingers in the water. After a short time a small pale bundle – about the same size and colour as a rockmelon – edged out its artificial cave. For a little while it remained at the bottom of its tank – staring up at me through its narrow horizontal pupils. As the octopus relaxed its skin turned from pale white to a darker red and, as it did so, it gently spread out and reached up with one of its arms. Once the suckers reached my fingertips more arms followed and began wrapping around my fingers and reaching for my watch like a bad magician.

I gently curled my finger to retain my ring and, in response, the octopus gripped the side of the tank with its other arms and tried to pull me down into its den. For such a small creature it was surprisingly strong. Looking around I saw other guests having similar tug-o-war contests and the research assistant kept herself busy for several minutes separating octopuses from people.

Officially a ‘cephalopod aquaculture research facility’ the Kanaloa Octopus Farm was established to work out how to grow octopuses in captivity. So far no lab has been entirely successful. The challenge is one of timings. Octopuses grow from tiny paralarvae to maturity in only a few weeks but, in their early stages of development, they’ve proven to be picky eaters – only feeding on live prey and not all that taken with the readily available brine shrimp.

Octopus are one of several species of ‘cephalopod’ – a family that also includes squids, cuttlefish and nautiluses (a sort of tentacled snail that can alter its buoyancy by regulating gases inside its shell). What makes octopuses unique is the complexity of its nervous system. While the number of neurons is a fairly crude metric for assessing intelligence it does provide a starting point for comparison. Octopuses possess about half a billion neurons. Depending on what you’re more familiar with that puts them roughly on par with either a domestic dog or a three-year-old child.

But philosopher and naturalist Peter Godfrey-Smith cautions against comparing octopuses to mammals. In his book ‘Other Minds’ he explains that;

“Vertebrate brains all have common architecture…[When] compared to octopus brains all bets – or rather, all mappings – are off. There is no part-by-part correspondence between the parts of their brains and ours. Indeed, octopuses have not even collected the majority of their neurons inside their brains; most of the neurons are found in their arms. Given all this, the way to work out how smart octopuses are is to to look at what they can do” 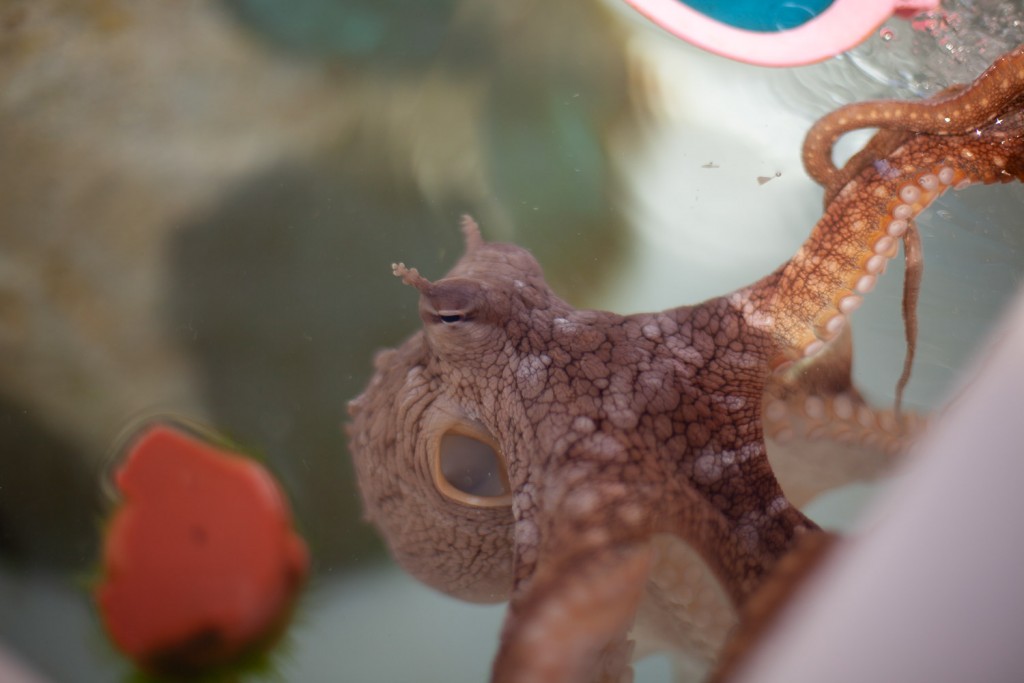 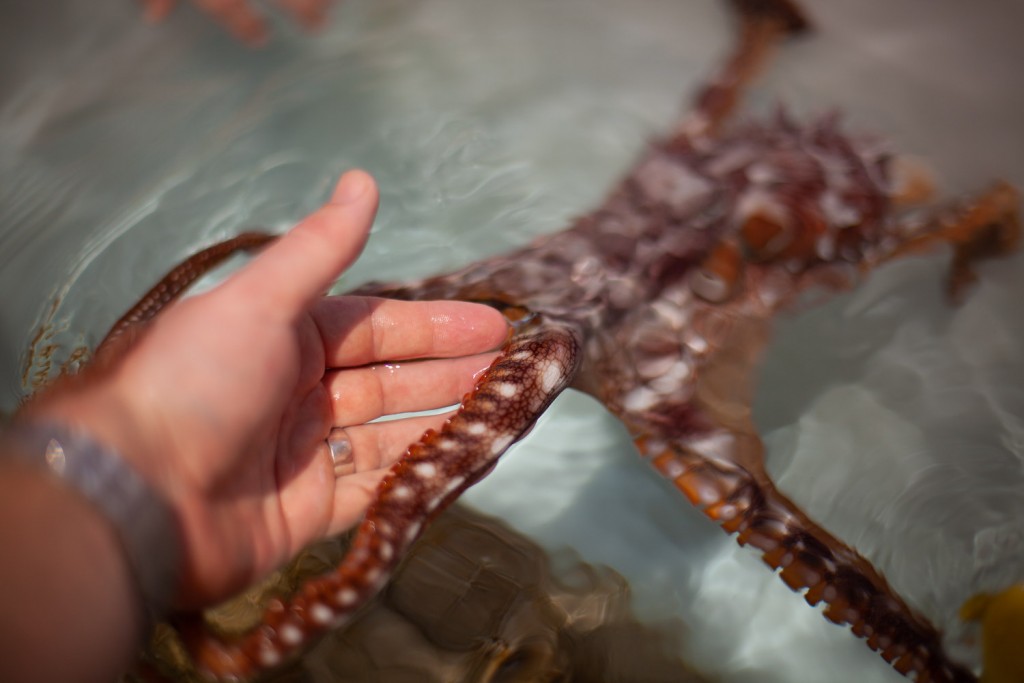 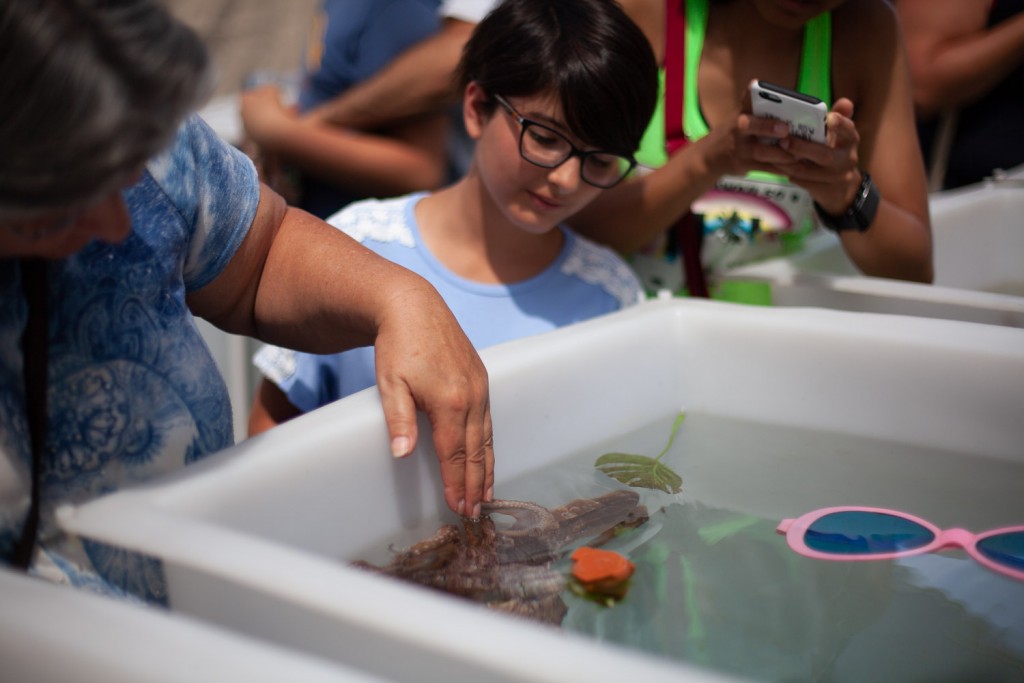 In the wild the octopuses display a wide range of hunting and camouflage behaviours but, in captivity, the most they can do is get up to mischief. Stories about escaping octopuses go back as far as aquariums themselves. In 1875 staff at Brighton Aquarium struggled to explain the slow disappearance of their captive lumpfish until they worked out that the neighbouring octopus was venturing out each night to feed and then returning to its own tank. Since then octopuses have cemented their reputation for Houdini-like antics. In 2016 an octopus called Inky escaped from an aquarium in New Zealand by pushing the lid off his enclosure, removing a drain-stopper and crawling 45 meters down a pipe to get back to the ocean.

Godfrey-Smith points out that such escapades aren’t evidence of exceptional intelligence on their own. Octopuses are known to venture out of the water to travel between tide pools and caves and midnight forays into other aquariums would seem to follow natural instincts. Instead he suggests that it’s the octopus’ ability to learn and improvise that sets it apart from other invertebrates. They can solve puzzles to find food inside locked boxes or mazes and they seem to retain enough memory of the tasks to improve with experience. Researchers even provide toys and novel objects for their captives just to prevent them from dismantling their aquariums out of boredom.

Researchers have also noted that octopuses in captivity seem to vary in terms of their temperament and their attitudes towards particular handlers. Some are more sociable than others and their moods are revealed, to some extent, in the way they change colour and shape. The octopus that I befriended at Kanaloa shifted between shades of blue and orange from moment to moment but the creatures are capable of much more dramatic transformations.

The mental capabilities of octopus are all the more surprising because they contradict so much of what we know about how intelligence evolved in our own species. Unlike mammals cephalopods are not social creatures and they do not rear their young. Apart from occasional acts of cannibalism most species of octopus avoid interaction with one another. They come together just once when they mate, after which the male wastes away and dies and the female retreats to its den to nurture the thousands of eggs she’s been left with. For weeks or months she protects the eggs from predators and keeps them clean by channeling water across them. When they finally hatch she also dies and only a tiny fraction of her hatchlings survive into adulthood.

Their short lives make octopuses the replicants of the animal kingdom – solitary, intelligent and expendable. Even the largest species live no more than two or three years at most. But if octopus didn’t develop their brains for sociability what drove evolution to create such adaptable minds?

Two factors seem likely to have contributed. One is the sheer complexity posed by the habitats where many octopus species evolved. Tropical coral reefs are some of the most diverse environments in the natural world but that diversity is what makes them so dangerous. Amongst the reef tens of thousands of species take turns acting as predator or prey. Without a shell or venom or some other defensive adaptation the octopus has had to rely on camouflage and cunning to survive. As one article I read put it; ‘if you’re not armored, you’d better be smart’.

The second factor may simply be the demands of the octopus’ body itself. While some other invertebrates have to coordinate multiple arms or legs few animals offer as much possibility of movement as the octopus. Godfrey Smith sums up the dilemma as follows:

“When the part of the molluscan foot differentiated into a mass of tentacles, with no joints or shell, the result was a very unwieldy organ to control. The result was also an incredibly useful thing, if it could be controlled. . . A vast range of movements became possible, but they had to be organised, had to be made coherent.”

Instead of trying to impose top-down control from a centralised brain the octopus appears to have delegated a certain level of independence to its limbs. Godfrey-Smith uses the analogy of a conductor and an orchestra but I tend to imagine it more like a person walking eight very well-trained dogs – you can give them commands but, when you’re not paying attention, they tend to do their own thing.

In meeting the motor-control demands of their bodies octopuses seem to have ended up with a brain capacity that is somehow more than the sum of its parts. Godfrey-Smith suggests that;

“A large nervous system evolves to deal with coordination of the body, but the result is so much neural complexity that eventually other capacities arise as by-products, or relatively easy additions to what the demands of action-shaping have built”

In evolutionary terms the gulf that separates mammals from cephalopods is immense. Almost every mammal on earth – from seals and dolphins to cats and monkeys – are all descended from the same rat-like creature which thrived in the aftermath of the Cretaceous extinction some 66 million years ago.

But to find a common ancestor with the octopus we have trace our family tree way back to primordial eras. The genetic split that differentiated vertebrates and invertebrates occurred in the Ediacaran period more than 620 million years ago amongst organisms so crude it’s difficult to even classify them as ‘animals’.

That timeline makes the octopus, in the words of Godfrey-Smith, ‘an independent experiment in the evolution of large brains’.

“If we can make contact with cephalopods as sentient beings, it is not because of a shared history, not because of kinship, but because evolution built minds twice over. This is probably the closest we will come to meeting an intelligent alien”

But not everything about octopus physiology is alien. Scientists at Johns Hopkins in the US have recently discovered that we share some of the same neurotransmitters as our eight-armed friends. Testing their preferences for sociability researchers placed their octopus subjects in a special tank with two rooms. In one was an action figure and in the other was a second octopus trapped in a basket. They then measured how long their subjects spent interacting with either the toy or their imprisoned comrade. The results confirmed that octopuses are not particularly interested in each other (or, possibly, they’re fascinated by superheroes). The researchers observed that interactions between octopuses were short and generally limited to one extended arm.

In the second stage of the experiment, researchers soaked their octopuses in a beaker filled with liquified MDMA and then popped them back in the special tank. This time their subjects proved to be much more social. In the paper they published – A Conserved Role for Serotonergic Neurotransmission in Mediating Social Behaviour in Octopus – the researchers noted the difference in behaviour.

“After MDMA treatment, social interactions were characterised by extensive ventral surface contact, which appeared to be exploratory rather than aggressive in nature”

Octopuses may be aliens but apparently even aliens want to cuddle when they’re on Molly. No word, as yet, on whether it also causes them to grind their mandibles or enjoy shit music.

There’s still a great deal that we don’t know about octopus behaviour and the evolutionary path they’ve taken to reach their current state. Their bodies – all slime and muscle – leave little trace in the fossil record. But whether it’s through their eerie similarities or their somewhat disturbing differences it’s clear that octopuses have a lot more to tell us about about what it means to be a thinking creature. 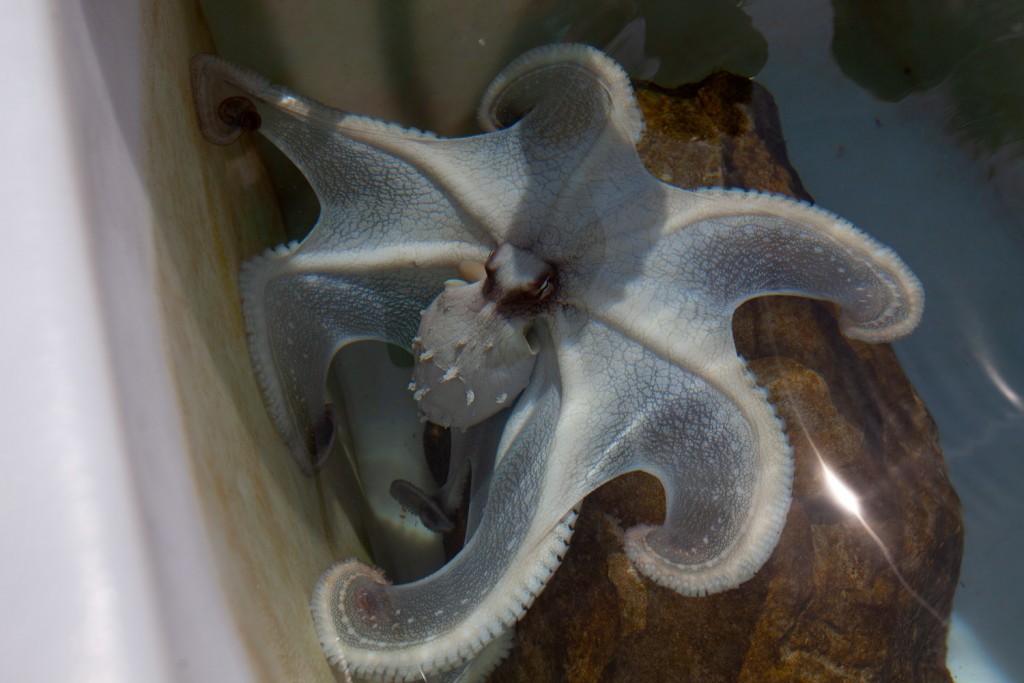 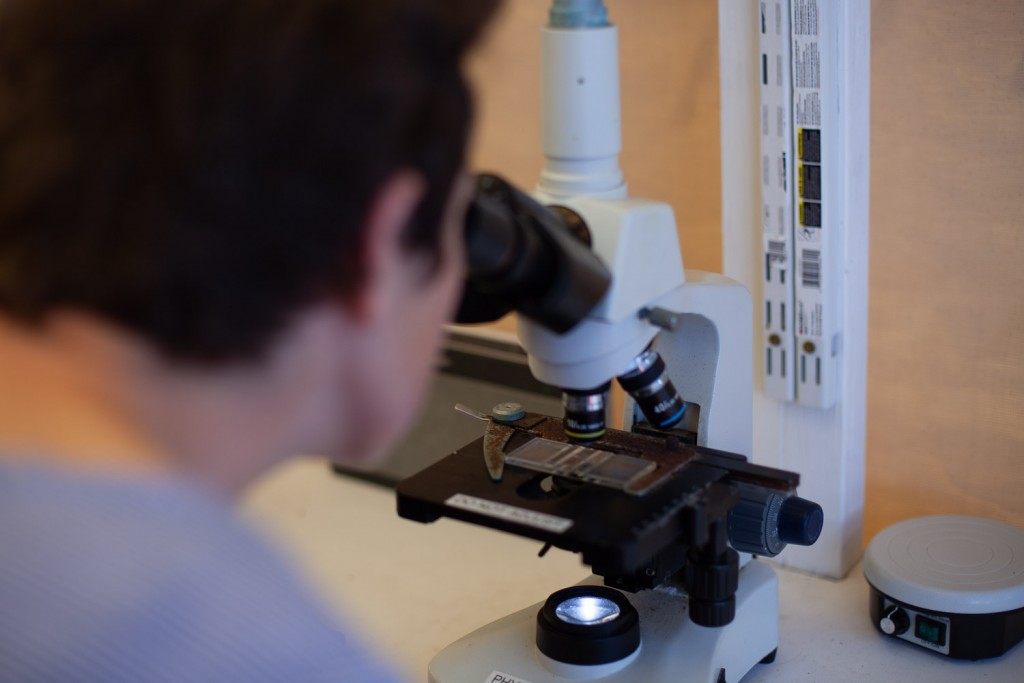 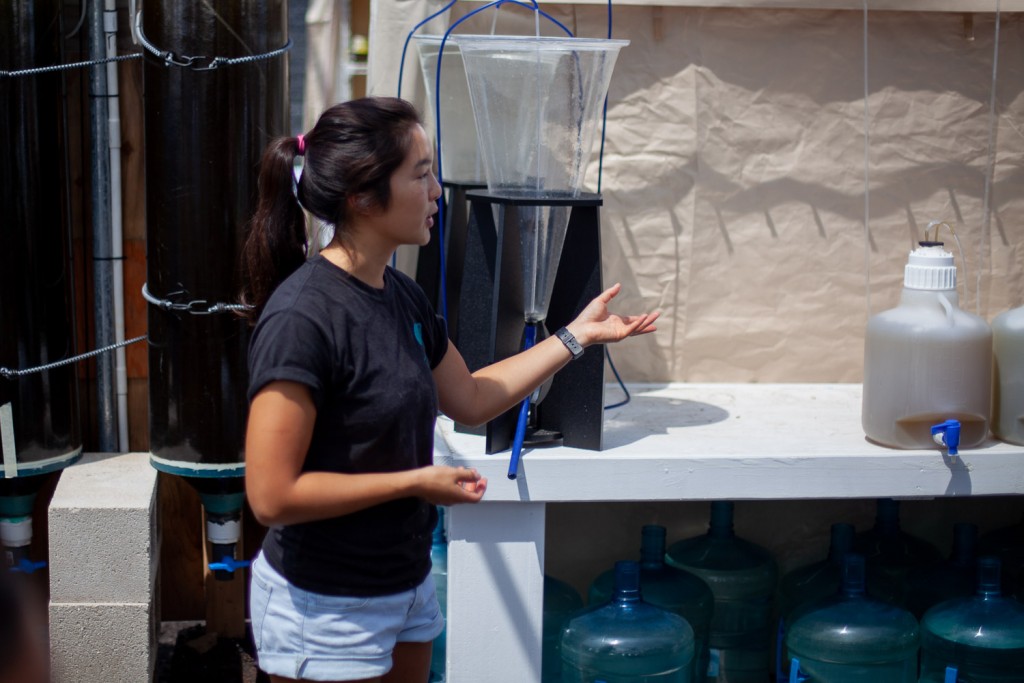 Pun notwithstanding a much more in-depth exploration of octopus brains and habits can be found in Peter Godfrey-Smith’s book ‘Other Minds; The Octopus and the Evolution of Intelligent Life‘. 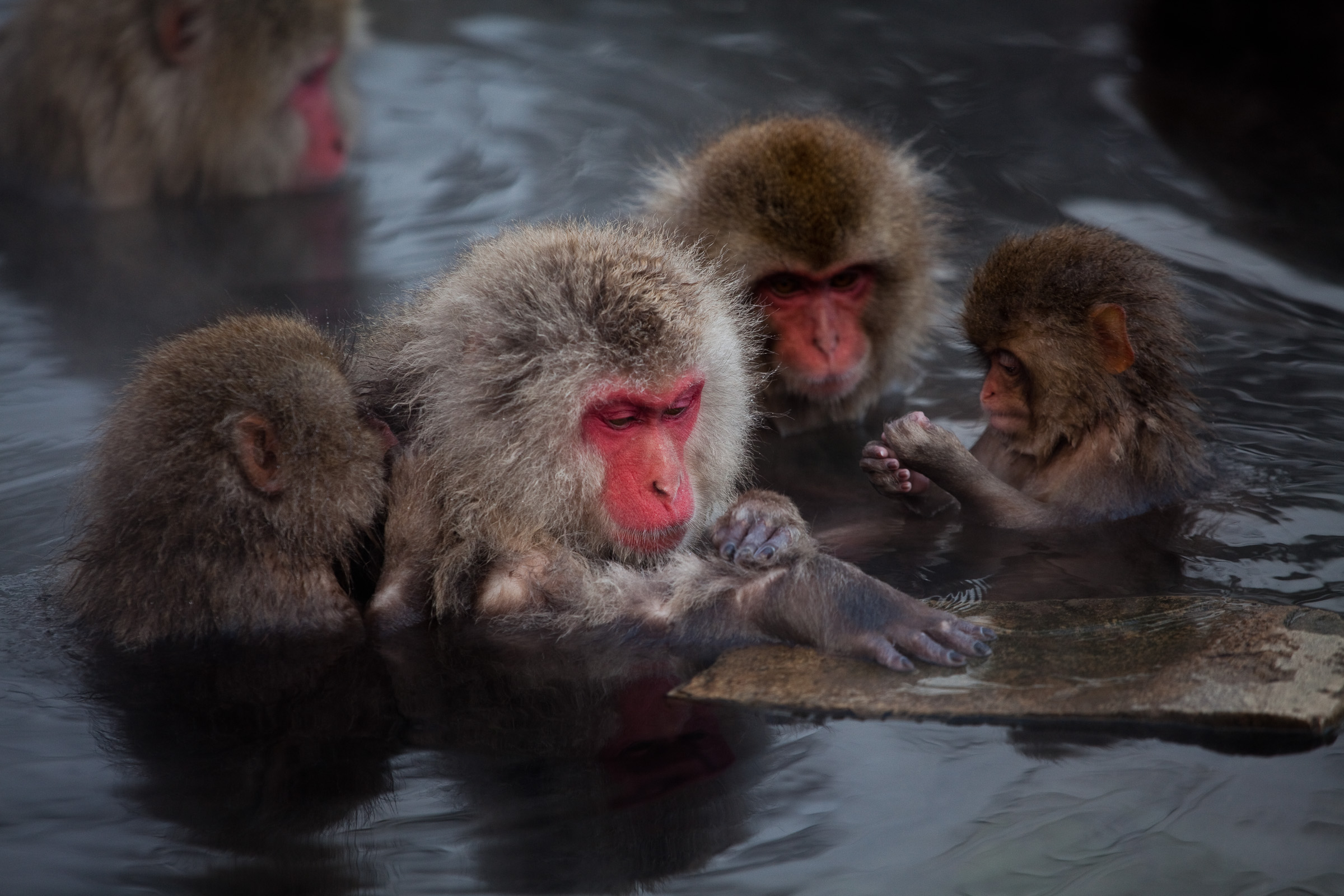 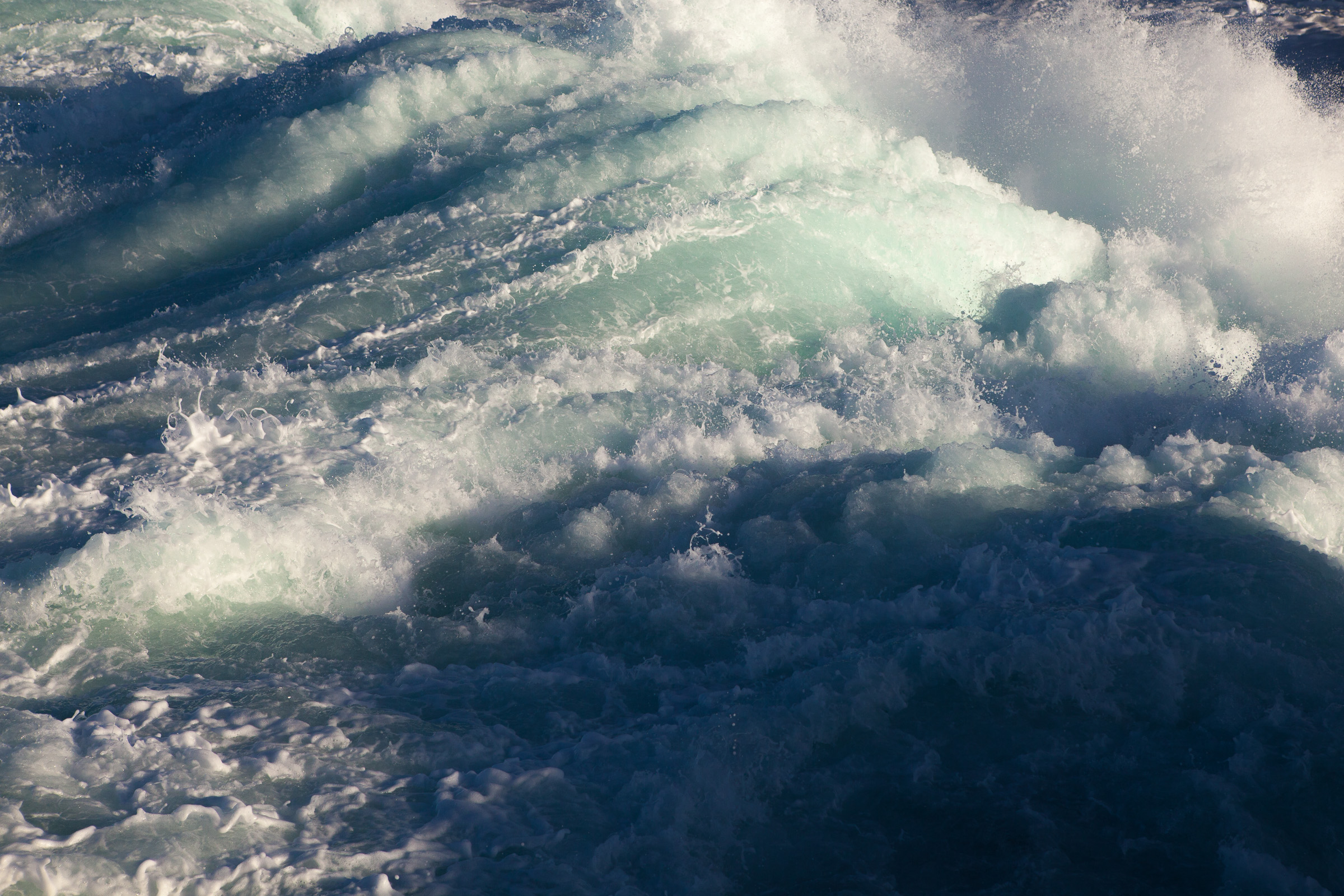 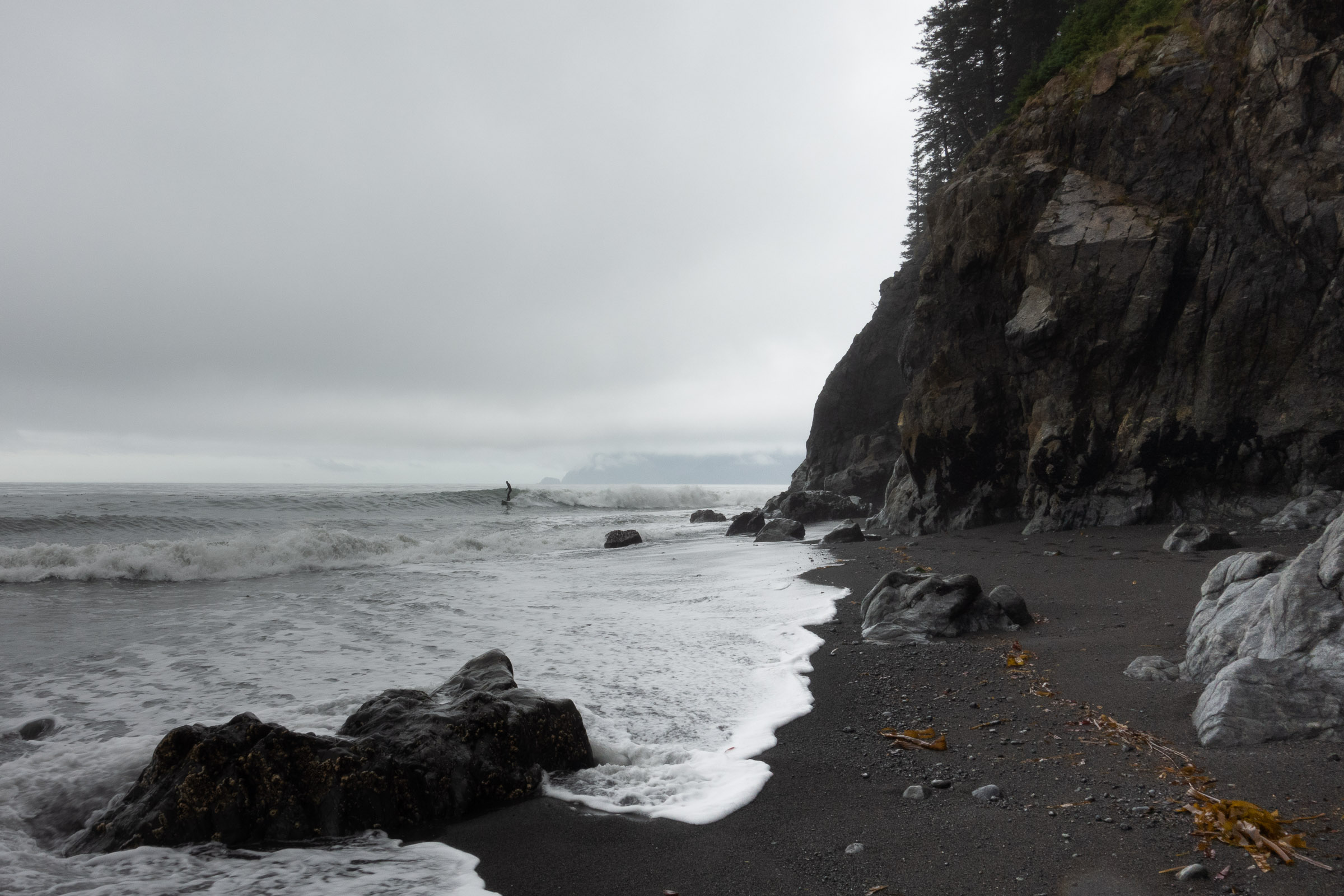