Reflections from a foray into the highlands of Georgia. 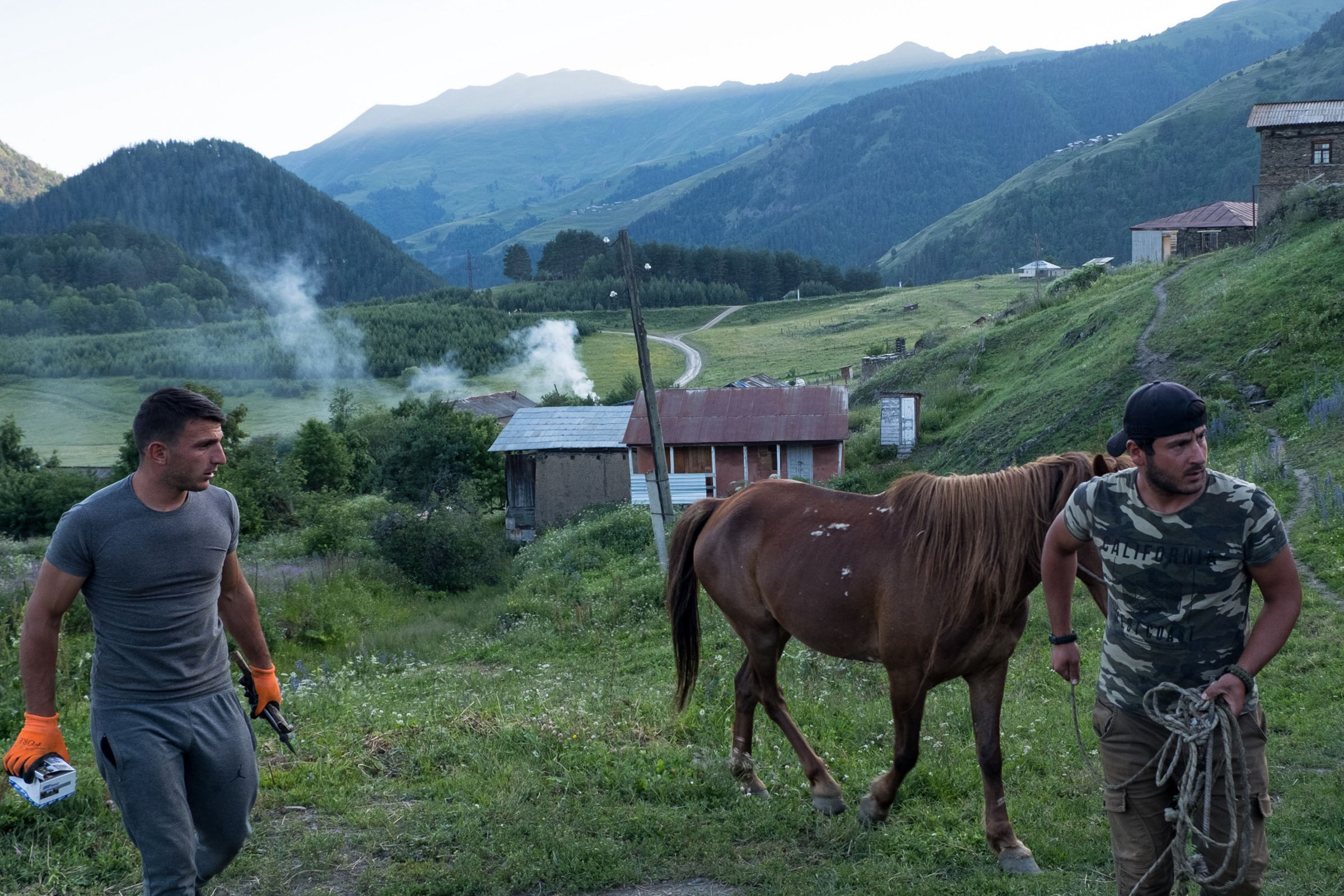 Men at work in the village. Joe Harrison / https://www.joeharrison.co.nz/

The boot of our Land Cruiser is full of sacks of gamey cheese as we head down the road from Tusheti to Alvani — a small Khahetian village on the plains below. The smell of the vehicle’s hard-working engine mingles with dust from the unpaved road. Zviadi, our blue-eyed driver, navigates the tight bends and relentless bumps to a soundtrack of Georgian folk music, Spanish pop hits and Eminem.

Open just a few months a year, the road to Tusheti in the northern Caucasus Mountains is usually impassable from October to May/June due to snow, making it the most isolated region in the Republic of Georgia. In summer, the main hazards are landslides and rockslides, evidenced by car-sized boulders pushed to the side of the road — not to mention driver or vehicle error. Our driver, Zviadi, does the trip with tourists and locals every few days. He holds a cigarette with his left hand and confidently steers the Land Cruiser with his other free mitt. Now and then he uses a rag to wipe sweat and dust off his hands.

The trick is to not look down or risk coming face to face with your mortality — and the fate of others who have sadly already gone that way.

Just a dozen families and border guards live in Omalo, the biggest and most accessible village in Tusheti (and the home to most guest houses), during the bitter winter months. “They’re born here, they must die here. They think like that,” says Nika, 16, who translates for English speakers at his family’s guest house during summer.

In summer, shepherds graze their sheep in the hills above the villages, sometimes taking them as high as 3000m. Before winter, they round them up and walk them down the same road we’re on. Unlike our four-hour journey at a cost of 50 lari each (NZ $26), it takes them days and often snows. 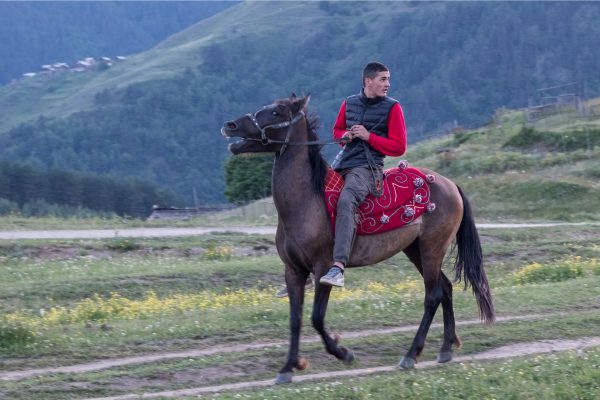 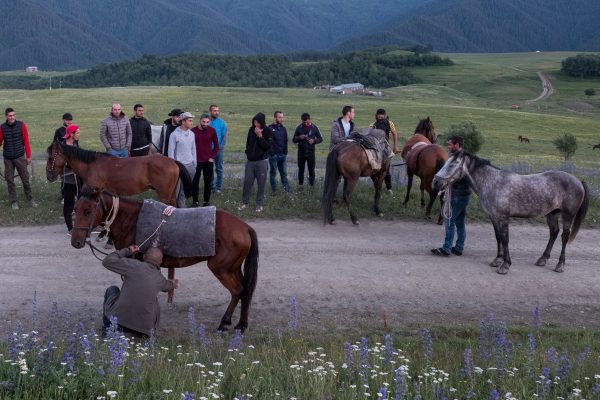 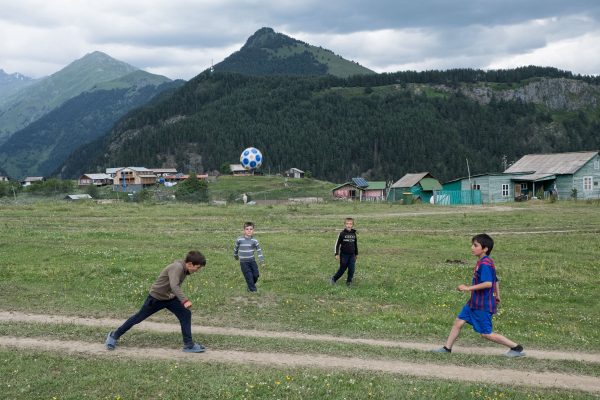 As well as using horses for getting around and moving livestock, many locals put their expert riding skills to use as trekking guides. These fit young lads are easy to spot, riding a horse with a blanket for a saddle or sharing beer from a two-litre bottle outside one of the village’s few stores.

On our first night in Omalo we notice a group of guys congregating at the edge of a meadow with their horses, greeting each other with “bicho” — the equivalent of using “bro” in New Zealand. We hang around and are soon buzzing with excitement as we watch two of them come screaming towards an informal finish line. With the horse race over, the Tushetian cowboys shoot the shit in the last hour of sunlight before departing with their horses into the sunset like a scene from an old Clint Eastwood film.

Georgia is known for its fresh produce and delicious meals, as well as its hospitality, so it is no surprise to wake up to a breakfast spread so huge and diverse that it’s difficult to decide what to eat or what time of the day it is. How about some khachapuri — a delicious traditional Georgian dish of hot cheese-filled bread? Or maybe some fresh tomatoes and an omelette… oh, those mini pancakes look good… is that pasta salad?

Breakfast beverages are thankfully a bit simpler, there’s either the kick-you-in-the-guts Turkish coffee or a pale green savoury Tushetian tea that smells a bit like Mum’s roast lamb but tastes great.

With our bellies crammed with every food group under the sun, it’s time to go for a walk in the mountains. Our target is Oreti Lake, one of Tusheti’s many alpine lakes accessible by horse or foot. We thumb a ride down the gravel road to the start of the track with some Polish tourists, laughing as we watch a local almost beat us to the bottom on foot, using all the secret shortcuts as we slowly navigate the switchbacks.

Our hike takes us up a forested ridge, past a group of farmers from nearby Pankisi Valley and their makeshift summer base and into the most beautiful alpine meadows we have ever seen — enough to inspire Heidi from Switzerland to break into song. We stop countless times to breathe in 360-degree views of the Caucasus mountains and appreciate the beautiful yellow and purple wildflowers.

Just 20 minutes from Oreti Lake we pass three tourists and a guide coming down who tell us there’s a shop selling coffee, tea and cold beer up there. They can’t be serious. We play along saying that we’ll order a cappuccino each. But they’re not joking. The worst part is realising we’ve left our wallets in Omalo. 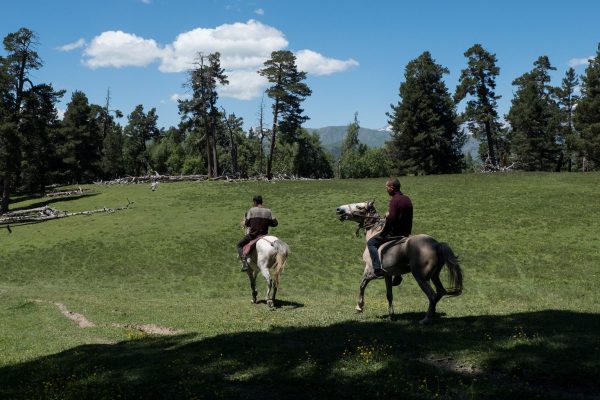 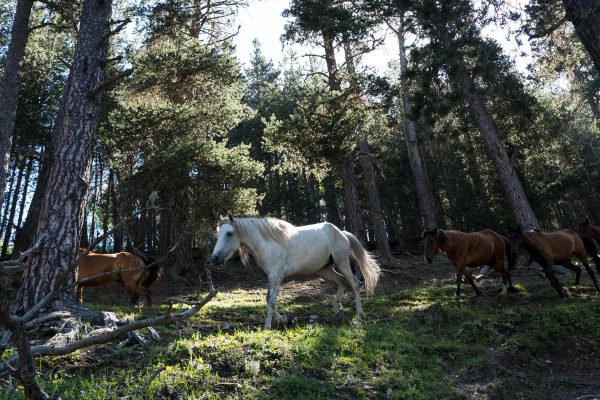 Later on at dusk, after dropping down a bit lower and setting up our tent, another shepherd — this time on foot — quietly brings his flock past. He takes a wide berth, but his shaggy-haired Caucasian Shepherd dogs still take an interest in us, barking and staring us down while we nervously cook dinner. These dogs will tear you apart if you mess with their livestock. In the mountains, they’re used to protect sheep from wolves who stalk flocks.

The next day we head back to our guest house in Omalo for another big feed. On the way down we come across two camouflaged border guards on horseback (Tusheti is bordered by Chechnya and Dagestan to the north and east). They’re carrying guns on their backs but they’re not intimidating — smiling and greeting us with “gaumarjos” — the casual version of “hello” — as they pass by.

Next up is a group of North American tourists being led up a steep section of forest by two gung-ho Georgian trekking guides. Their clients have all got a death grip on their reigns, feet stuffed alarmingly deep into their stirrups. We marvel at how calm and tolerant the Tushetian horses are under the helm of such rookies.

But it’s not long before we earn the ‘rookie’ title ourselves.

We take a shortcut near the end of the track and end up amongst a bunch of cattle — bad idea. Seconds later, two huge dogs come tearing towards us, all teeth and gums. We grab the nearest sticks we can find and start screaming and yelling and looking as large and scary as we can. Thankfully it works and our aggressors back off into the forest. We make our escape onwards to Omalo and the first cold beer we can find.

Morning comes and we begin the long journey down from the mountains to the plains. We’re sad to be leaving but also glad to be getting out before the rain on the forecast invites more landslides. The cool mountain air and solitude we have enjoyed in the last few days will soon be replaced with Tbilisi’s hot and noisy streets and a stuffy subway with commuters heading home after a day at work.

While it’ll be nice to enjoy a good coffee and reliable internet connection back in our tidy apartment, the comfort of these luxuries will soon fade. Our memories of Tusheti, on the other hand, won’t leave us anytime soon. 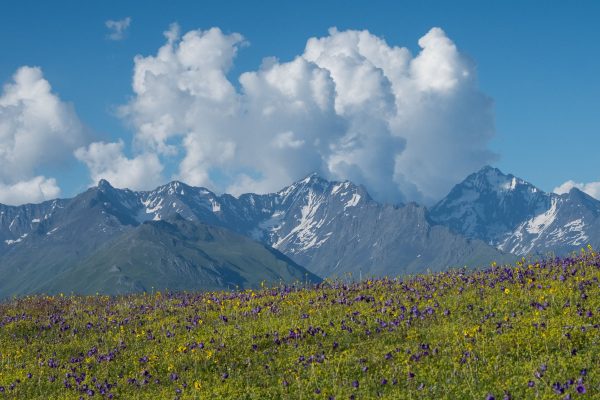 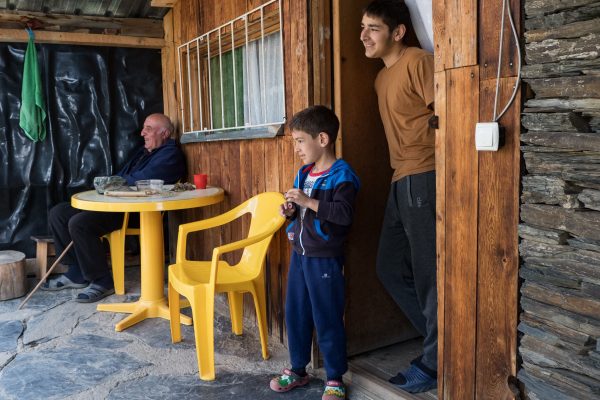 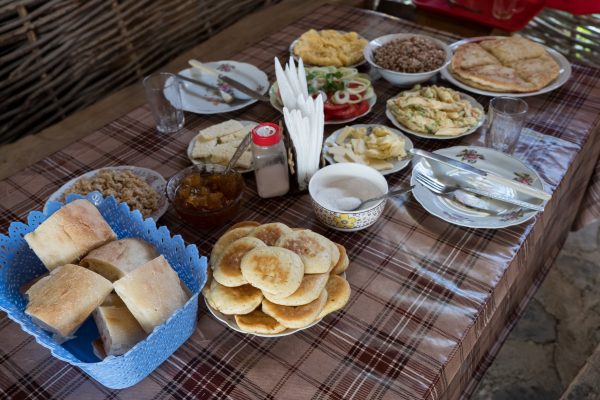 *in 2017 New Zealand photographer Amos Chapple tagged along with a band of shepherds as they made “their deadly, boozy journey from the mountains of Tusheti to the plains of Kakheti”. Check out his fantastic photo essay here: https://www.rferl.org/a/28817495.html.

Written by Anna Pearson with photos by Joe Harrison. Based in Christchurch, New Zealand.