In the valleys of Cappadocia are hundreds of cave churches from the early years of Christianity.
Richard Pendavingh   Nov. 4, 2013 10:08 am 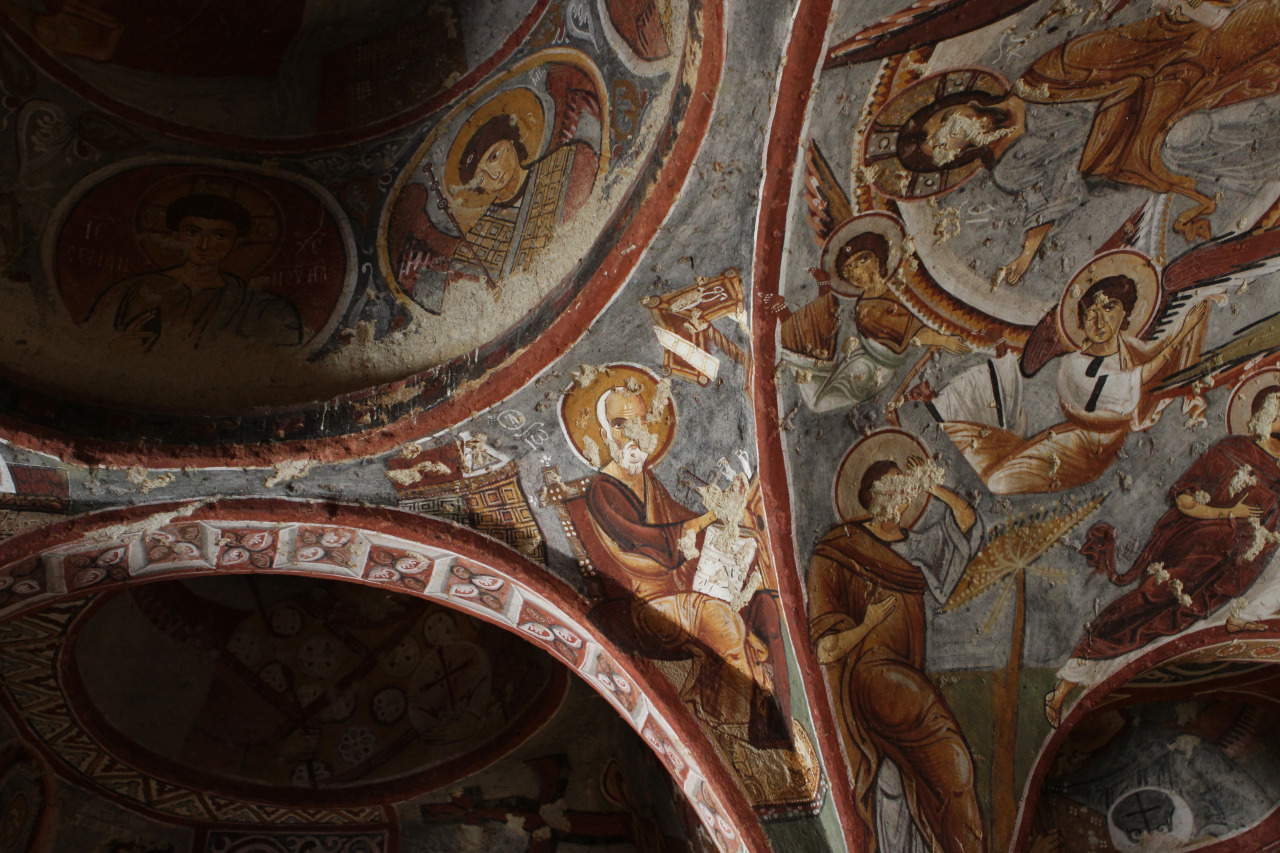 Frescoes on the ceiling of a cave church in Göreme, Cappadocia.

Most of the caves are not much bigger than a garage but they have many of the features of actual churches.  They generally have an identifiable apse, a transept (the two little ‘wings’ on either side of the alter) and most have vaulted ceilings.  Some even have pillars that have been carved into the walls.  Over the last few decades archaeologists have gradually cleaned the dust and soot from the ceilings of the caves to reveal frescoes and paintings made by the original inhabitants.   The frescoes depict the life of Jesus and the early martyrs of the church.  Some of the imagery, from 1st and 2nd century AD, is inspired by the Gospel of James – a collection of writings that didn’t make it through the editorial process when the Bible was compiled.

The task of restoring those frescoes has been made more difficult due to the intentional damage that has been done to them over the years. Many of the frescoes have been literally defaced- the scenes left largely intact but the faces chiseled away.  Given that Turkey has been a majority Muslim country for many centuries it might seem obvious to ascribe the damage to subjects of the Ottoman Empire.  But Islamic prohibitions regarding depictions of prophets and saints are predated by similar laws found in Judaism and Christianity – all three religions trace that rule to the first commandment of the old testament;

You shall have no other gods before me. You shall not make for yourself a carved image – any likeness of anything that is in heaven above, or in the earth beneath, or that is in the waters under the earth. You shall not adore them, nor serve them (Exodus 20:3-5).

The cave churches of Cappadocia were created centuries before Muslim conquest.  They were carved out by Christians fleeing persecution at the hands of the Roman Empire.  So the damage could have been done by vengeful authorities seeking to suppress the early Christians and defend traditional Roman polytheism and state-sponsored cults.  But, more likely, the damage to these frescoes was probably done by other Christians at a later date.  Long after adopting Christianity as the official state religion the Eastern Roman Empire (Byzantines) went through two upheavals during the 8th and 9th century.  This period was known as the Byzantine Iconoclasm.  The meaning of the word ‘icon’ has shifted in recent years to refer to pictographs but, historically, an icon was a representation of a religious figure.  Iconoclasm, by extension, is a Greek term that translates to ‘image breaker’.  During these periods the various religious authorities waged a kind of civil war over ‘aniconism‘ and the veneration of images.  Artworks were destroyed or painted over, those accused of heresy on both sides were excommunicated, imprisoned, tortured or killed.  Despite a great deal of scholarship historians have not formed any real consensus over why this conflict erupted.  From Wikipedia.

Traditional explanations for Byzantine iconoclasm have sometimes focused on the importance of Islamic prohibitions against images influencing Byzantine thought. According to Arnold J. Toynbee, for example, it was the prestige of Islamic military successes in the 7th and 8th centuries that motivated Byzantine Christians to adopt the Islamic position of rejecting and destroying idolatrous images. The role of women and monks in supporting the veneration of images has also been asserted. Social and class-based arguments have been put forward, such as that iconoclasm created political and economic divisions in Byzantine society; that it was generally supported by the Eastern, poorer, non-Greek peoples of the Empire who had to constantly deal with Arab raids.

Discussions about icons and idols and graven images tend to get bogged down the theological arguments.  A long line of Christian, Islamic and Jewish scholars have spent their lives extracting quotes and references supporting why this or that practice does or does not constitute an affront to their god.  Islamic scholars have created a hierarchy of ‘shirk’ to distinguish between the various ways that veneration of god can be misguided.  Orthdox Jews adhere to the ‘halakha’ which prohibits the depiction of religious figures and angels but also ‘heavenly bodies’ of any sort.  Early protestant Christian sects during the reformation tried to ban even the image of the cross.  Pre-occupation with idolatry is not exclusive to Abrahamaic religions either.  Although there was no explicit injunction against icons early Buddhist art was also aniconic – Buddha was instead represented by the Bodhi tree, an empty throne or other abstract symbols. But the the question over why the issue of idolatry flared up in that particular region at that particular time is beside the point.  The real question is why idolatry itself pre-occupies so many religious traditions and still lies at the heart of so many modern conflicts.

Rather than looking at scripture the issue of icons could be better explained in more prosaic terms like branding and copyright.  The underlying premise of aniconism is political and it stems from concerns held by those in power.  The question they ask themselves is always the same; does this new artwork elevate or undermine my authority?  Nowadays we think of Catholic Church as a monolithic entity with a strict chain of command and a rigid hierarchy like the military.  The pope and his cardinals and bishops are the commanders and the individual priests, scattered across the planet, are the foot soldiers.  But for much of the church’s history a better analogy would have been the relationship between franchisor and franchisee.  In the early church the religious leaders could make declarations, collect tribute and distribute funds to individual churches but technology simply didn’t allow for tight control over what those churches did. 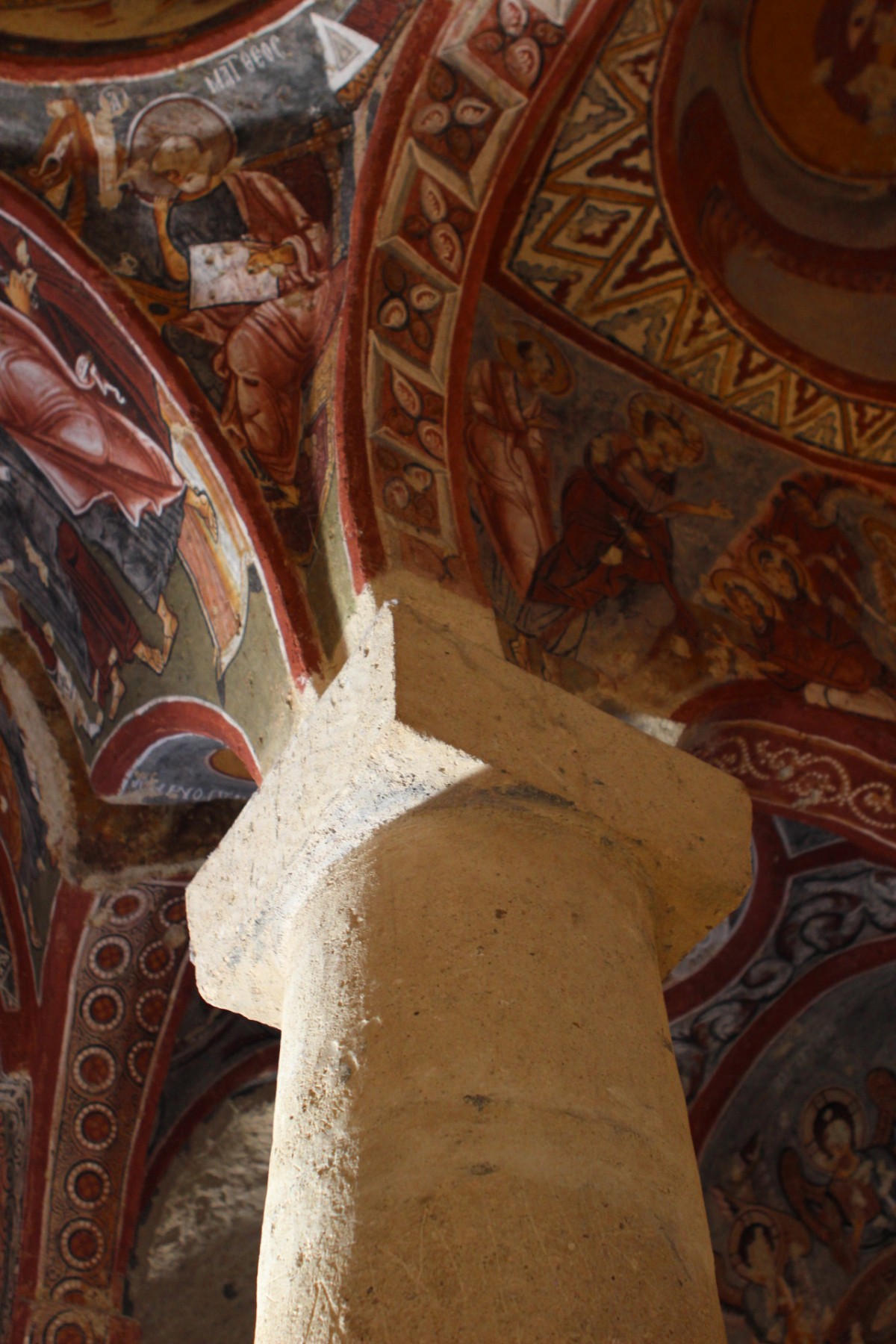 Icons became a problem because they opened up the possibility of damaging the cohesive ‘brand’ of the religion.  Certain regions could become wealthy and influential and the artworks and buildings that they commissioned could easily dilute the influence of the ruling authorities.  The heartland of Christianity had already moved from Rome to Constantinople in the 1st millenium.  Emperors and popes at the time must have understood that it could easily move elsewhere if individual diocese were given too much latitude.  Under modern corporate law individual franchisees are similarly confined by the terms of their contracts- they can tailor their advertising and even their products for local markets but certain elements of the core brand must be faithfully reproduced and a share of profits must always flow back to the franchise holder. Otherwise those individual franchisees might become competitors rather than branches.

Scripture, then, is only used to provide a sort of legal case to support the authority figure trying to claim or re-claim territory.  Written texts in the early church were classified as ‘canonical’ (like the Gospel of Luke) and ‘apocryphal’ (like the Gospel of James) while certain practices were decreed to be heresies or acceptable depending on where the advantage lay and which regions needed to be brought into line.

In religion, as in marketing, the name of the game is cohesion.  From an article on the origins of iconoclasm;

“It has also been suggested that Iconoclasm was orchestrated by the secular clergy in an attempt to regain their centralized ecclesiastical authority, which was threatened by the popularity of holy men, icons, relics, and monasteries.”

A modern equivalent to this struggle can be found in recent Australian history with the establishing of the US chain restaurant Burger King.  In the early 70s, when the Burger King Corporation entered the Australian market, they discovered that the trademark for that name was already held by takeaway shop in Adelaide.  To avoid infringement they changed the name of their Australian branches to Hungry Jack’s and those restaurants became a major source of revenue for the company.  But, in the long run, that success meant that the Australian outlets no longer saw themselves as subsidiaries.  From wikipedia;

After the expiration of the trademark in the late 1990s, Burger King unsuccessfully tried to introduce the brand to the continent. After losing a lawsuit filed against it by Hungry Jack’s ownership, the company ceded the territory to its franchisee. Hungry Jack’s is now the only Burger King brand in Australia; Cowin’s company Hungry Jack’s PTY is the master franchise and thus is now responsible for oversight of the operations that country with Burger King only providing administrative and advertising support to ensure a common marketing scheme for the company and its products

Christianity, Judaism and Islam are all ‘Abrahamic’ religions that trace their origins to the old testament. Nowadays we tend to think of these religions as very distinct from one another.  Their territories are clearly defined.  Their cultural practices and languages have parted ways long ago and evolved along different lines.  But in the first millennium, to an outside observer, those communities would have been difficult to distinguish from one another.  Successful campaigns of iconclasm were what allowed those religions to consolidate their power and maintain centralized control.

Over the last ten years the idea of iconoclasm has been linked almost exclusively to radical Islam.  The Taliban destroyed the Budddahs of Bamiyan in 2001.  Sunni and Shia Islamists have destroyed each other’s mosques and tombs as the power balance has shifted one way or another.  Saudi authorities have dismantled and bulldozed early Islamic monuments and tombs as part of a campaign against sacred sites that run counter to their strict Wahhabi brand of Islam.  In western Europe radical Islamists have targeted film makers and artists that have depicted the prophet Mohammed- a prohibition that stems from concerns over idolatry. More recently, in Iraq and Syria, ISIS have destroyed monuments and archaeological sites in the their captured territories including the World Heritage site of Palmyra which is home to Ancient Roman and Assyrian ruins.

Many commentators have taken the view that this cultural vandalism points to something uniquely xenophobic about Islam.  Rather it should be seen as an intrinsic problem with theocracy of all types.  If the currency of power in a society is symbols then those symbols will come under threat during periods of political instability.  The missing faces in the cave churches of Cappadocia are evidence that this is neither a new problem, nor one that is confined to a single religion.

It’s worth remembering that all religions have conducted campaigns against art and cultural heritage.  As a society we have forgotten radical Christianity and, in doing so, we’ve succumbed to a hypocritical view of our own cultural history.  We’ve also forgotten that, historically at least, Islam has a long track record of religious pluralism and respect for the artifacts of competing faiths.  The reason those monuments are still around to be destroyed by ISIS and the Taliban in the 21st century is because of an unbroken line of sultans and caliphs who allowed those monuments to stand within their territory unmolested for hundreds of years.

The Byzantine iconclasm teaches us that, even if the acts themselves are carried out by fanatics, the underlying motivations are practical and political.  The best chance of preserving cultural artifacts lies in an understanding that aniconism is not senseless vandalism decreed by god but part of a much larger, and much more parochial, conflict between religious franchisees.