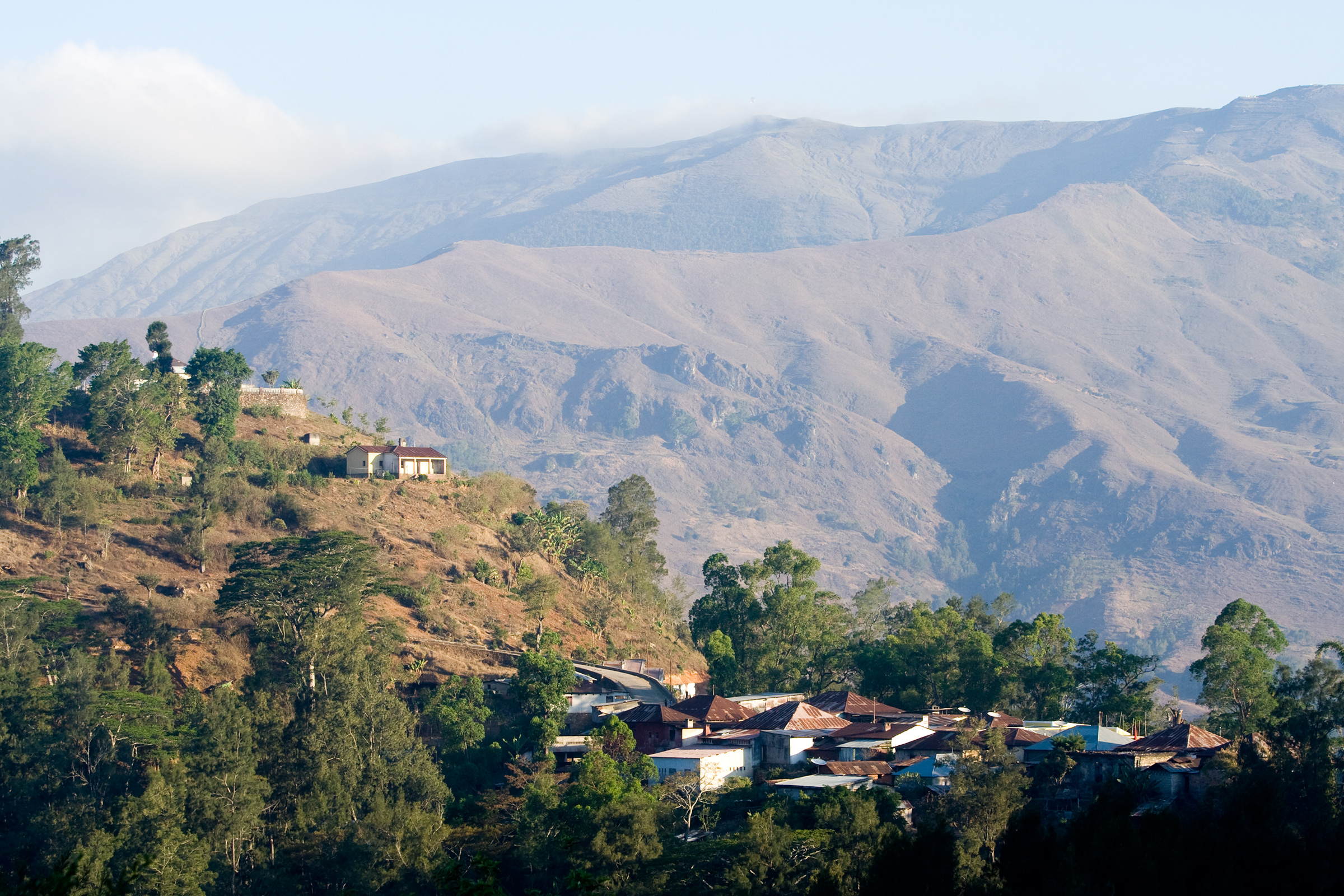 Houses on a ridge-line in Ainaro in the highlands of East Timor.

It’s a long trip so Shane and I take turns as the designated ‘waving back guy’. By the time the sun starts to go down we are in the clouds and the dry tropical forests and prefab concrete buildings have thinned out and given way to jungle and traditional thatched huts. Higher still the truck heads into country that looks for all the world like the Scottish highlands with black cliffs and green pastureland shrouded in mist. The ranges here are higher than any in Australia and the temperature has dropped accordingly. Shane and I are forced to pull on more layers and huddle against the cabin.

Way up in the mountains we pass a young boy rugged up in a traditional woven poncho herding goats out of the way of our truck. It’d be a timeless moment if he weren’t wearing iPod earphones. We spend the next several hours driving in the dark on what must be some of the steepest, windiest, most decrepit roads in the world. Worse than South Australia even. The only good thing about the darkness is that we can no longer see the massive ravines that mark the edge of the road. Ignorance, in this case, is bliss. 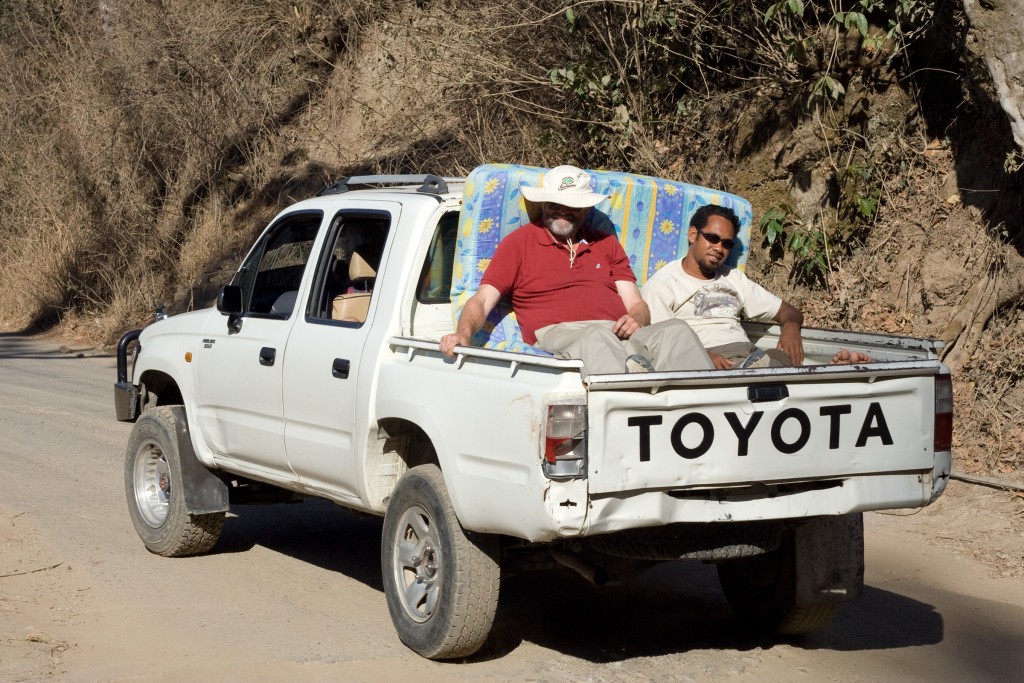 The temperature picks up as we travel down into the lowlands once again. After an eternity of potholes the truck lurches onto a bridge that spans halfway across one of the massive rivers that I saw on the flight over. After a hundred meters all traffic is forced offroad across the riverbed at a snail’s pace. From the river bed we arrive on the main (only) road of Zumalai. The Carmelite mission is the only place in town with electricity so it isn’t difficult to find. The journey has taken about ten hours. As the crow flies we have travelled no more than 70 kilometres.

After dinner I flop into bed under a mosquito net and sleep like the dead. I had been forewarned that Zumalai was the town of a million roosters. But I wasn’t expecting the lizards and the dogs and the motorbikes and the children shouting to one another at all hours of the morning. The adults are friendly but a little shy- they don’t appear to know what to make of us or what I find so fascinating about their town. The few elderly women in the village have teeth and lips stained red from chewing betel leaves – I’m told it’s a mild stimulant but they seem pretty chilled out.

Shane and I spend the first couple of days in Zumalai re-wiring the run from the generator building to the dining room- a distance of about a hundred meters. As we work the magnitude of the task slowly became apparent. The only tools and materials we have are those we’ve bought with us. The existing electrical system is a mess of bare wires, daisy-chained extension cords and powerboards with cheap Indonesian wires taped or tied together and looped from tree to tree or held out of reach by bamboo poles. There are no fuse boxes or circuit breakers and at night, if the backup generator is needed, the standard procedure is to run a severed extension cord from the generator and twist the frayed end into a break on the main system. Like most activities in Zumalai it is done with the assistance of a bunch of eight year olds.

In the evening I climb Golgotha. The hill above the mission has 14 crucifixes representing the stations of the cross and from the top you can see all of Zumalai from the mountain road leading to Bobonaro in the north to the half-bridge over the Mota river in the to the south and far beyond that the Timor sea. There’s a slight breeze and it’s almost peaceful at the top of the hill. I feel a little light-headed as I make my way back down for dinner but I chalk that up to fatigue. 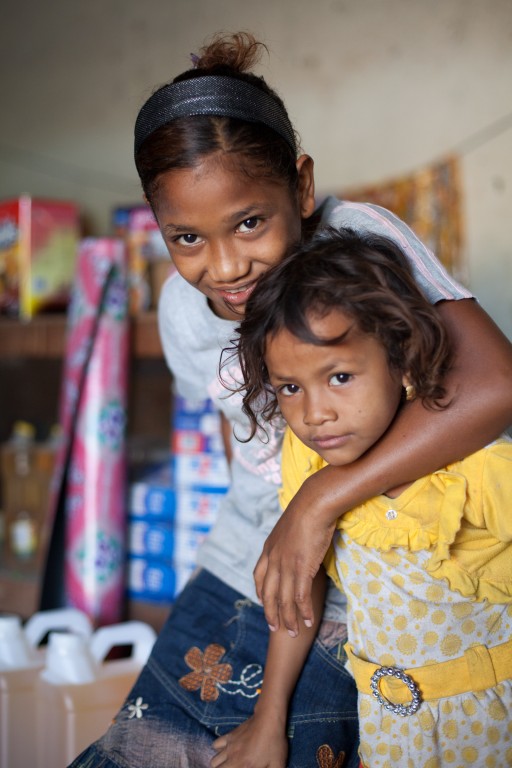 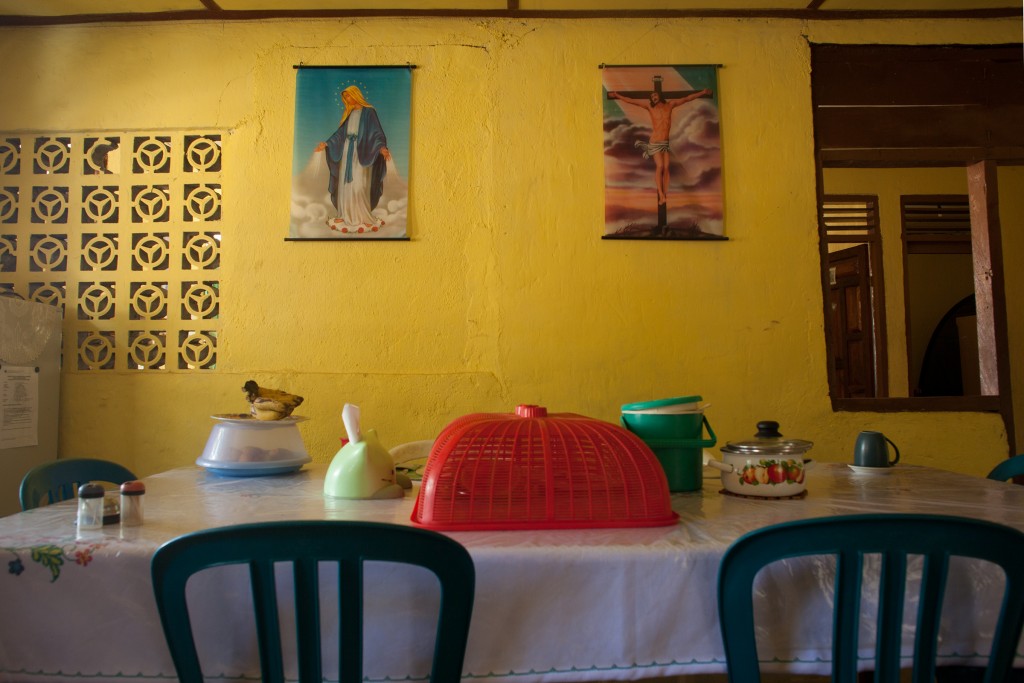 After Fr Antonio says grace I politely excuse myself from the table. As the others start on dinner I stumble outside and bring up my lunch. I tell the others that I’m feeling a little sick and head back to the youth centre. A few minutes later I throw up the remaining contents of my stomach and a few minutes after that I start dry-retching. When the fever kicks in my body lapses into a cycle of cold sweat, dizziness, nausea and then retching. Shane becomes worried. He asks if I need a doctor. The clinic is just across the road, it’s even connected to the church’s generators. I say no. My mind isn’t working properly. Overriding everything is the thought that it’s ludicrous for a person like me to come to a place like this and, like a dumb tourist, get sick then ask for free medical attention from aid workers in one of the poorest places on earth.

I should have said yes. As soon as I realised I couldn’t keep water down I should have insisted. Soon it becomes too difficult to think straight. I can only fixate on things; at the torch, at the peeling linoleum, at the water bottle and the bucket and the net and my necklace which is caught in my mouth. When I lean over to retch nothing comes out but I can hear drops of sweat tapping against the inside of the bucket. Each time my body tries to bring something up I pass out for a few minutes so fever dreams start to blend into hallucinations. Everyone and everything visits my room in the night; motorbikes, helicopters, roosters, screaming pigs, howling dogs, old ladies with bloody teeth and children that talk like lizards. It’s all somewhat disconcerting.

I don’t stop retching for 10 hours.

Sometime after dawn I finally pass out. When I wake up Antonio has brought me some bottled water and two beautiful women in lab coats. Sulema and Dunja are the two Cuban doctors from the clinic across the road- angels with stethescopes to my bleary eyes.
“Ituan moras” Antonio explains.

Conversation is tricky. The doctors, Dunja and Sulema, only know a little tetum and while Antonio speaks a little Portugese it differs somewhat from their Spanish. I understand ‘sospechoso malaria’. 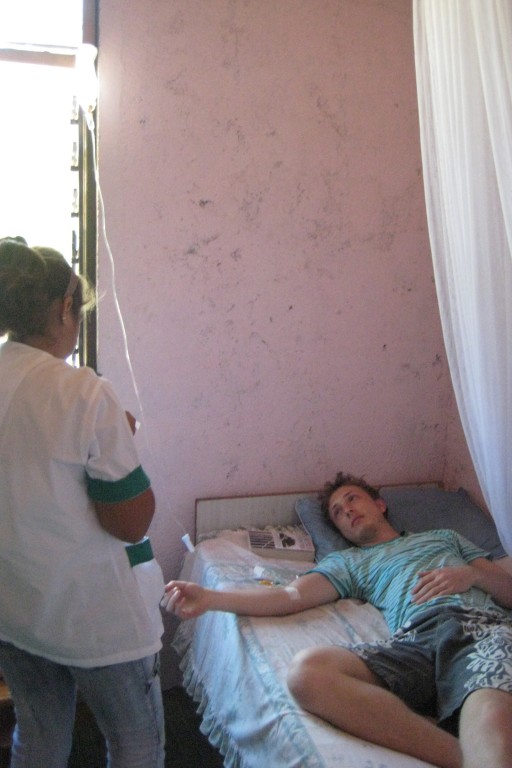 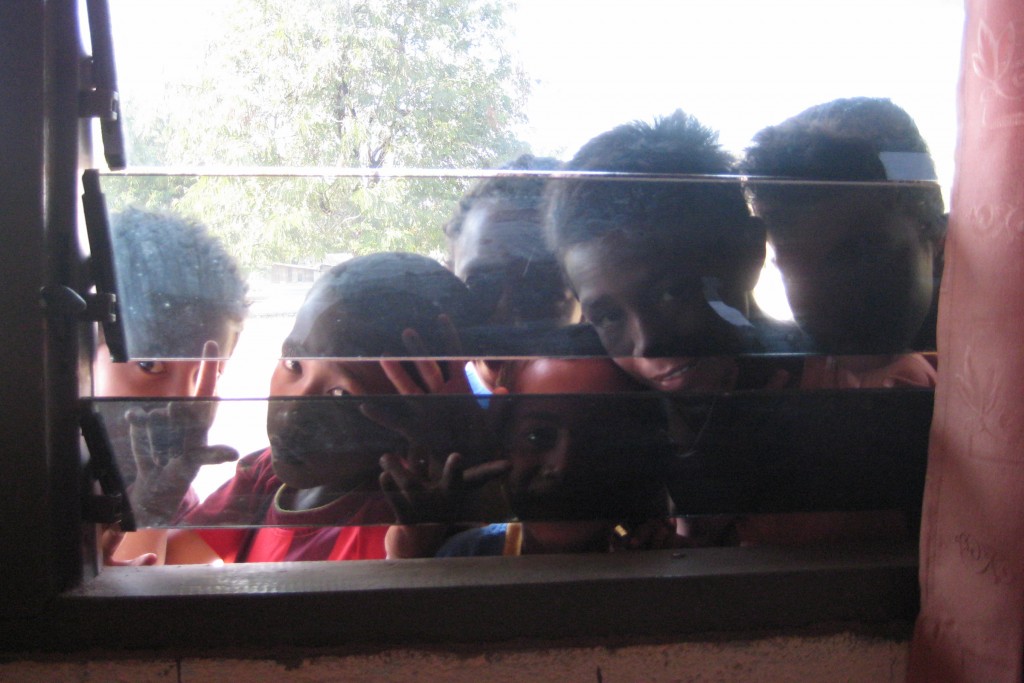 Seemingly the whole village has turned out to watch the proceedings. There are kids just outside the window trying to get a look in at the moras malai. I get an anti-nausea injection to the arse and they take my blood pressure and temperature readings and I’m helped out of bed and onto a set of scales. I weigh in at 59.3 meaning I’ve lost almost three and a half kilos.

I swear when they put in the needle for the IV. Sulema finds this quite amusing and provides a faithful ‘ahh fuck!’. Those who comprehende and those who la comprehende both laugh. I gather that the clinic doesn’t have testing facilities to work out what I have so for now they give me anti-malarial tablets and chloroquine syrup.

With the IV drip into my right arm I can only give Sulema an awkward one-handed hug, gracias and abrigado and thankyou seem to fall well short. She just laughs and shakes her head in mock dismay- it is too ‘manas’ to hug in timor.

I’m finally left alone in blessed relief. I stare at the drip on the IV and the mosquito net balled up like a fist above the bed and I listen to the sounds of construction. The youth centre where I’m staying is being rewired today and the place is a hive of activity. Who’d have thought that putting in plugs and switches would involve so much drilling and hammering? After a few hours the noise abruptly stops.
I hear Jila in the next room.
“Generator broken” he says
“Generator broken?” says Sean
“Generator. . .thirsty” Jila amends.
A few minutes later they resume drilling. They also make a considerable noise removing the drum kit from the music room next door. Once the solar panels are in place the youth centre and the dining room will have constant power. This means they will be able to run a refrigerator. Curing doesn’t seem to be popular in Timor so the only meat anyone eats is that which has been butchered immediately before meal time. 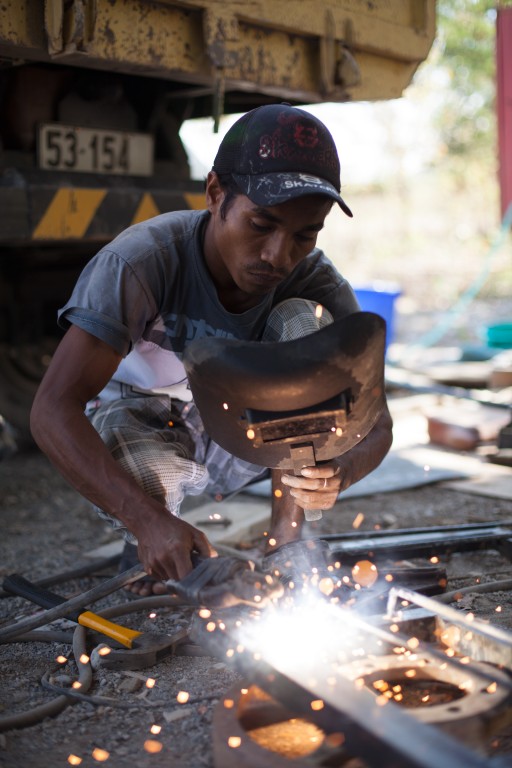 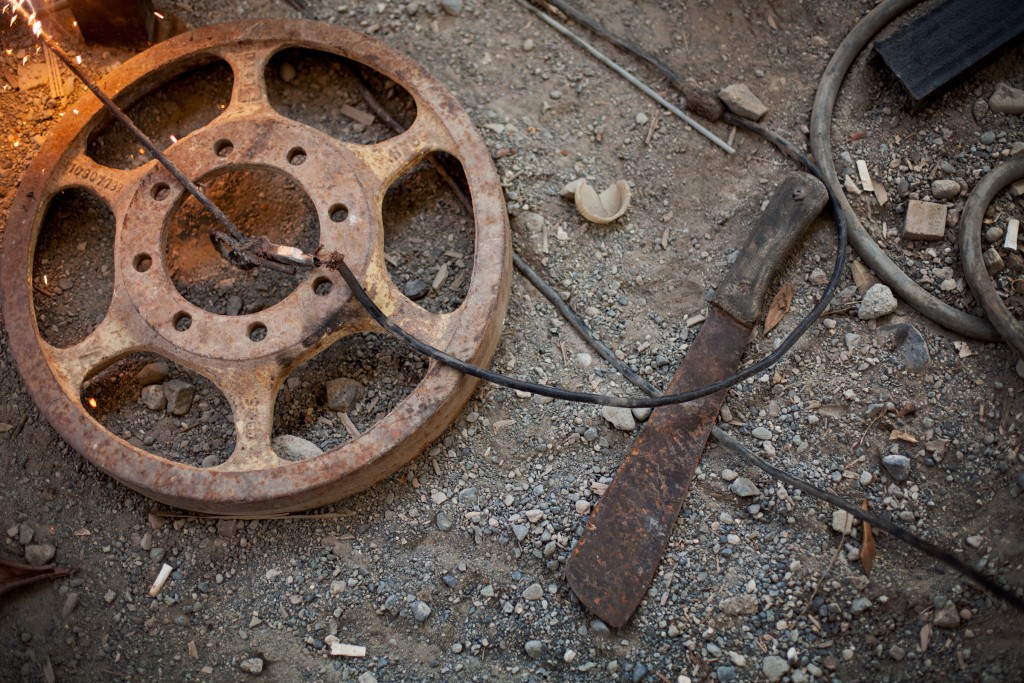 The clinic has solar power and a refrigerator for medicine. When Sulema returns to change over the IV fluid she brings me a can of Sprite. It’s the first cold drink I’ve had since the flight over and I’m not sure whether to drink it or press it against my head till it goes warm. There’s a breeze in the afternoon and my temperature has dropped down to 28 degrees and I’m starting to feel philosophical about the whole situation. It’s just part of the experience I tell myself. this is the treachery of the healthy mind. Richard-Twelve-Hours-Ago would like to kick my arse I’m sure. Last night I would’ve given anything to make the pain stop. Then again Richard-Twelve-Hours-Ago could barely summon the energy to spit so he never really posed much of a threat.

Late in the afternoon, just after Jila’s masonry drill appears through the wall of my room and Sulema and Dunja return with two male doctors from the hospital in neighbouring Suai. They tell me they’ve tested my blood and determined that I have the local strain of malaria. The two male doctors are bemused by Jila and his upside-down power plug and seem more interested in the electrical work than my condition. That’s reassuring in its own way. I think at this point I have probably met the entire medical establishment of Cova Lima district. For his part Sean goes right on stripping wires. Last time he visited Zumalai he contracted cellulitis from a cut that hospitalised him for a week. Malaria is old-hat. Sean is more of glass-half-full kinda guy anyway.
“at least malaria is better than leprosy” he says
“Yeah, better than having your leg cut off” says Shane
“Better than a poke in the eye with a burnt stick” I say
There’s a pause.
“I dunno” says Shane “we’ll put that one in the ‘maybe’ column” 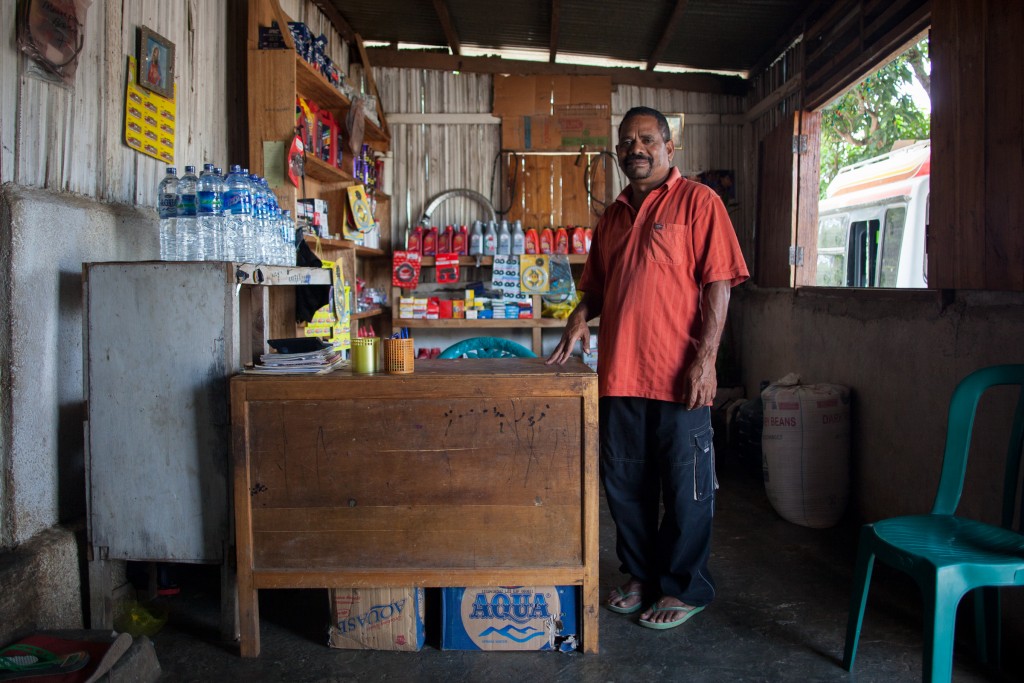 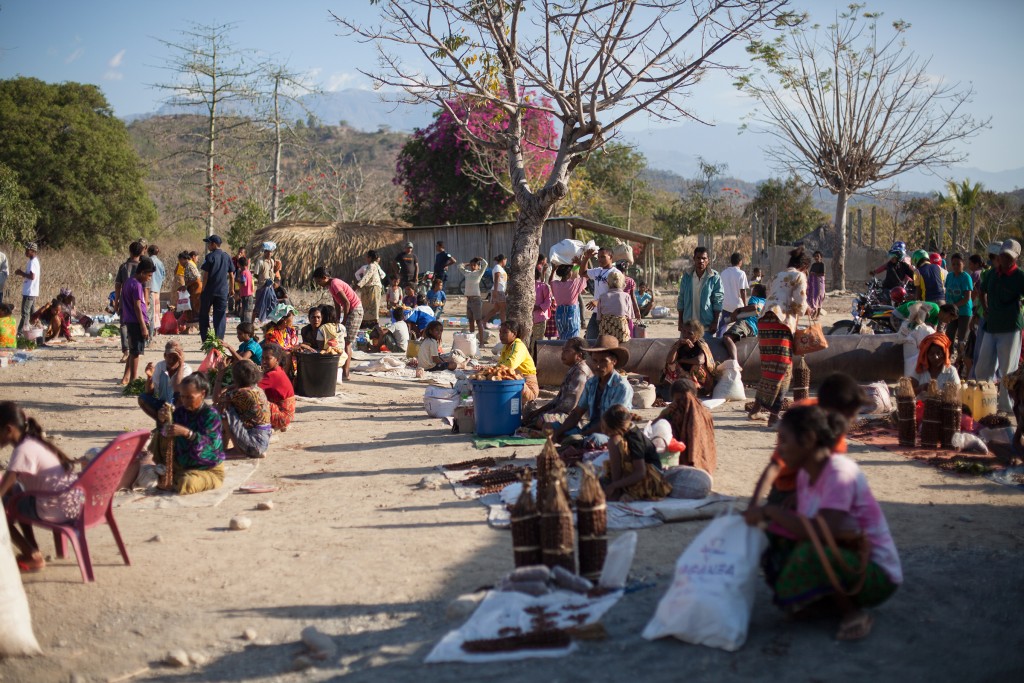 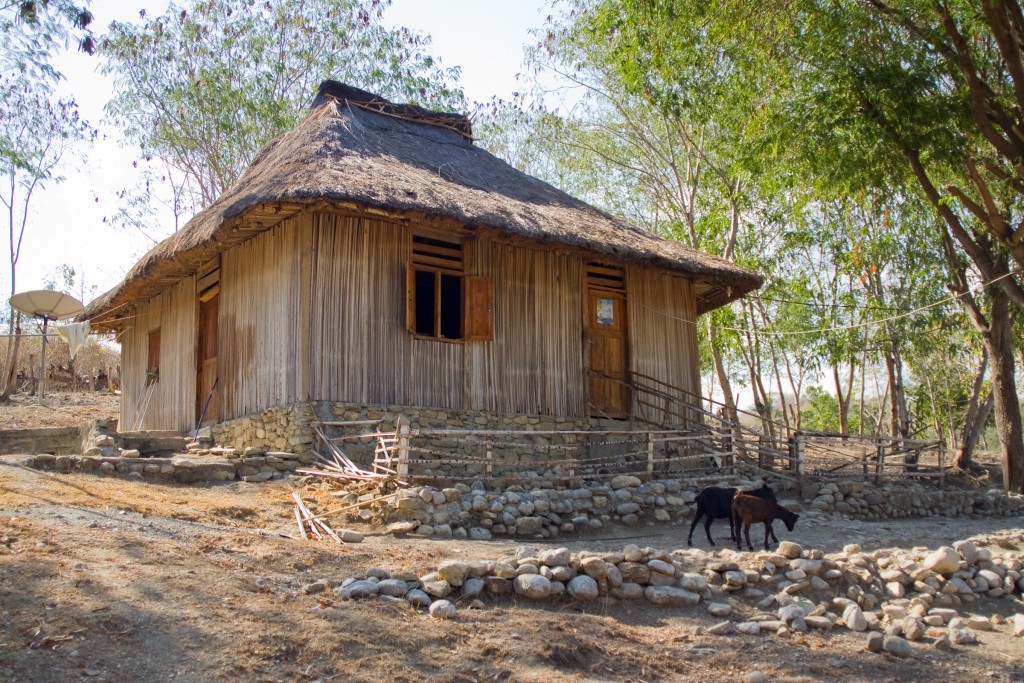 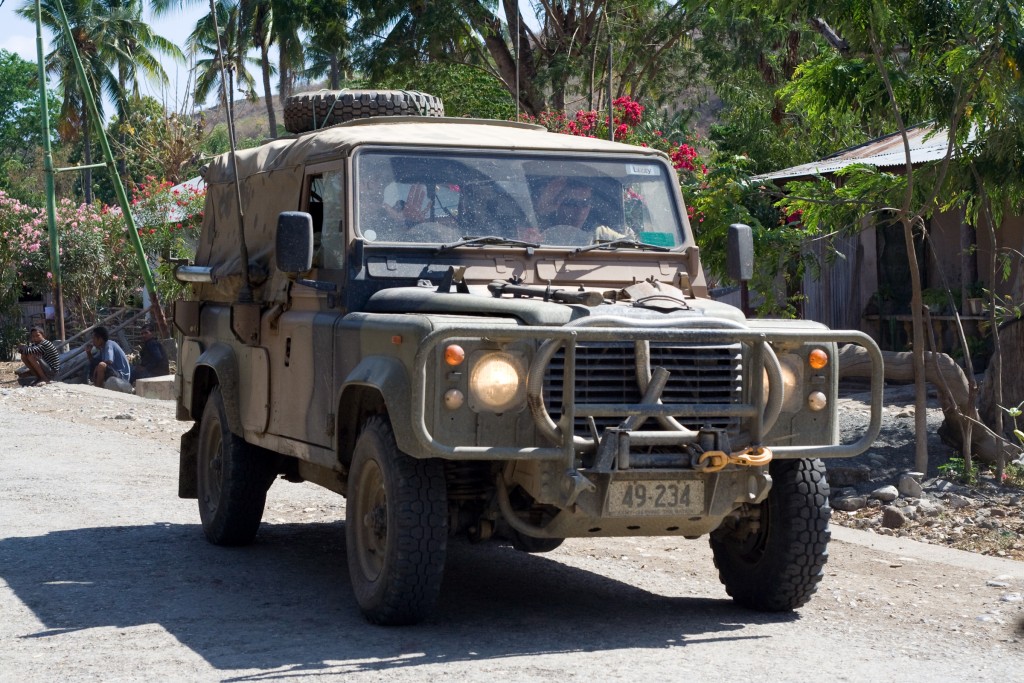