The Nakagin Capsule Tower in Tokyo is a run-down testament to the ambition of some of Japan's most celebrated post-war architects.
Richard Pendavingh   Mar. 20, 2015 05:41 pm 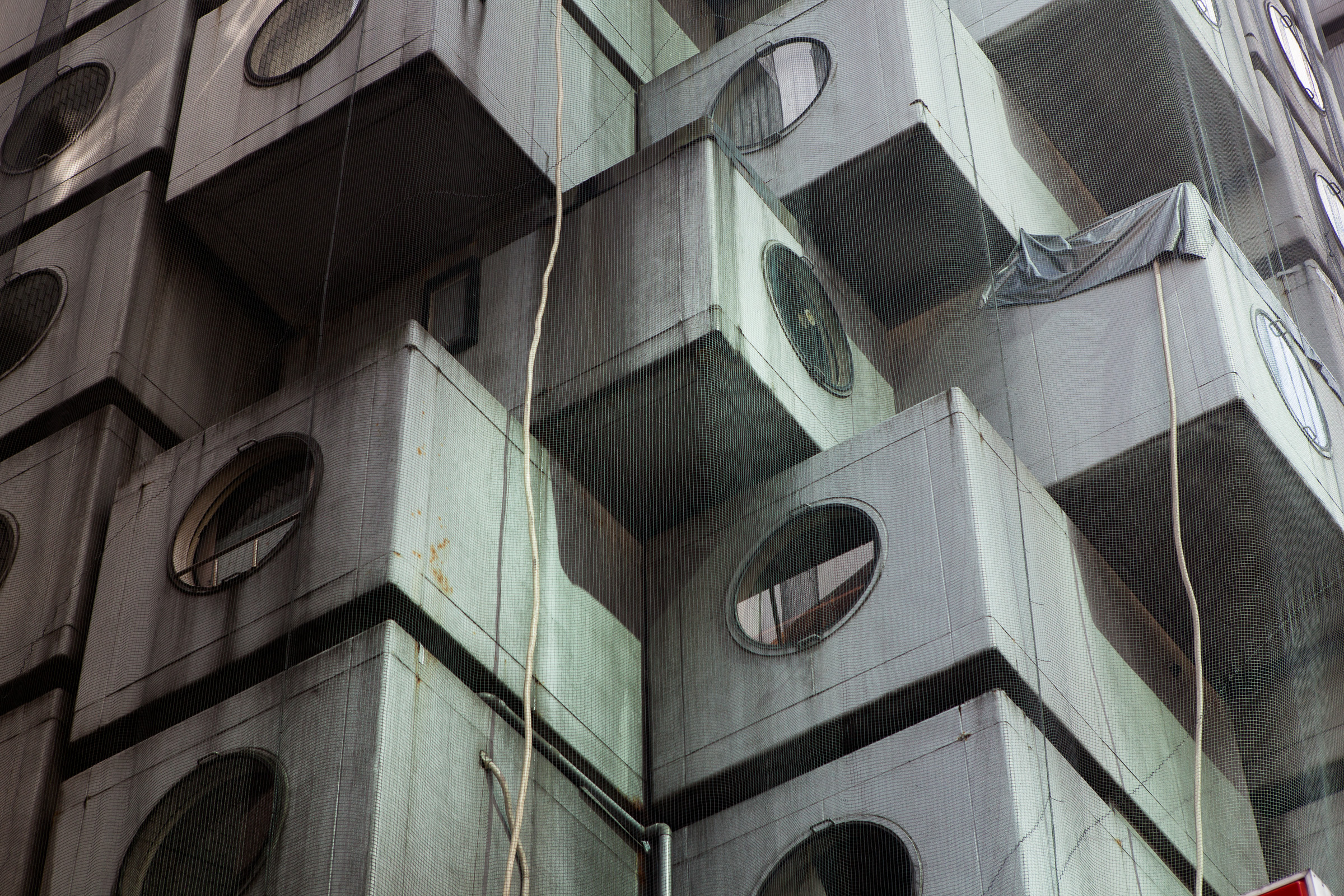 Detail of the 'Capsule Tower' designed by architect Kisho Kurokawa and located in Shimbashi, Tokyo, Japan

Made up of 140 concrete ‘capsules’ bolted onto two interconnected cores, the building was designed to be a cheap and modular living space for Tokyo.’s new generation of salarymen.  Each apartment was assembled off-site with the bed and appliances (including a stove, fridge, TV and tape-deck) built into the capsule.  Each had a single large porthole to the outside world and a bathroom about the size of an aeroplane toilet was set into the opposite corner.

The tower was designed by architect Kisho Kurokawa – one of the pioneers of an architectural movement known as Metabolism.   The concept was to build cities that could grow like an organism.  According to Wikipedia:

Initially the group had chosen the name Burnt Ash School to reflect the ruined state of firebombed Japanese cities and the opportunity they presented for radical re-building. Ideas surrounding nuclear physics and biological growth were linked with Buddhist concepts of regeneration.

In their vision the cities of the future would house the means of constructing and transporting new living spaces and accommodation.  The buildings would be modular, pre-fabricated and self-contained and the cities could respond to changes in population and demographics with relative ease.

Another member of Metabolist movement, Kiyonori Kikutake, was even more ambitious. He envisioned floating nomadic cities that were self-sufficient and self-governed.  JapanFocus.org has an incredible article about Kikutake’s designs for the Okinawa International Ocean Exposition of 1975;

Kikutake’s ‘marine city’ was … a floating metropolis in the ocean; self sustainable, flexible, clean and safe, earthquake-proof, impervious to flooding and away from urban sprawl on the main land.  The project is based around steel rings, measuring over two miles in diameter, on which towers would sit  holding 1250 magnetized living units that could be easily replaced without causing any damage to the structure. the circular foundations would float on bottle-like forms boasting rich aquaculture farming.

The Japanese government and private industry actually built a 15 thousand ton prototype Marine City known as Aquapolis for the Expo in ’75.  A plaza on the upper deck with lawns and a heliport gave the giant structure the appearance of a half-built offshore oil platform.  The lower decks housed exhibition areas, control rooms, machine rooms, living quarters and a post office offering international services.  It also included one of the world’s first waste water recycling systems. All visitors to the structure received certificates of Aquapolitan citizenship. 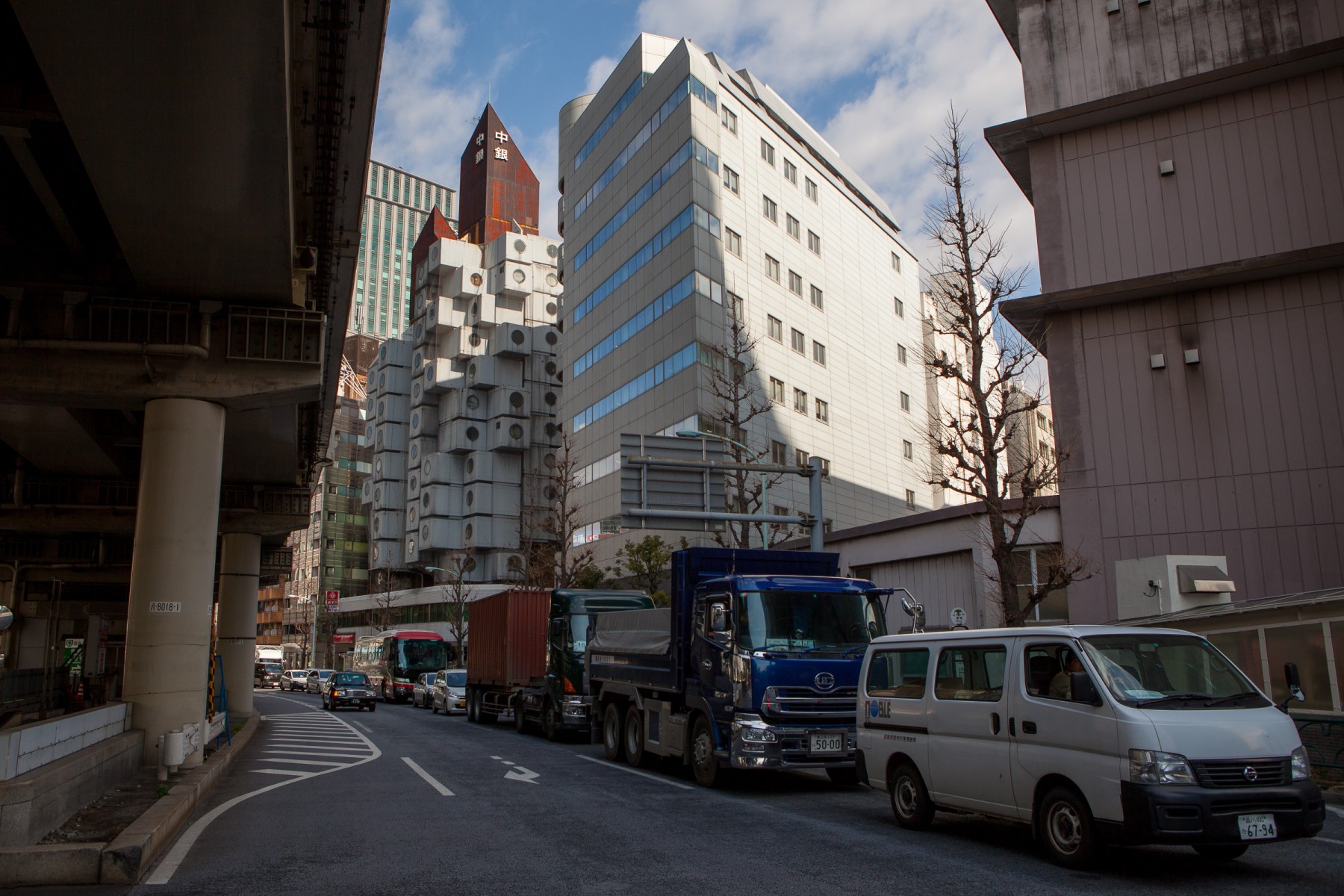 The only real example of Metabolist design principles in action would be the construction of space stations.  The Russian Mir and, later, International Space Stations were pre-fabricated and clipped together piece-by-piece over several years in order to overcome the payload limitations of the rockets that carried them into orbit. Russian Space Web has a neat little interactive graphic showing the ‘growth’ of Mir over the ten years of its construction.

Aquapolis was moored off the coast of Okinawa for 25 years before being towed to Shanghai for scrap metal in 2000.  The Nakagin Capsule tower looks set to be demolished in the near future as well.  In the last few decades the tower has fallen into disrepair.  According to a New York Times article from a few years ago

“There’s been no serious effort to look into what exactly it would cost to retrofit the 140 units. Nor has any institution, public or private, stepped up with a viable plan for how to save it.”

Which is a shame because it seems as if losing this building would mean losing one of the few remaining symbols of a movement with truly utopian ideas about how people could live. Even failed experiments should be preserved- if only to spur on others to experiment.

Security at the Nakagin turned me away when I tried to have a look inside and there are no trespassing signs in English and Japanese strung up all over the building. However photographer Noritaka Minami created a beautiful photo essay a couple of years back entitled 1972 showing the interiors of some of those apartments.

As it turns out at least one of the apartments is available on Air BnB. Had I known I’d have stayed there in a heartbeat. A Nagakin capsule apartment would be the perfect place to look out at the Tokyo skyline and dream about floating cities growing like vines. 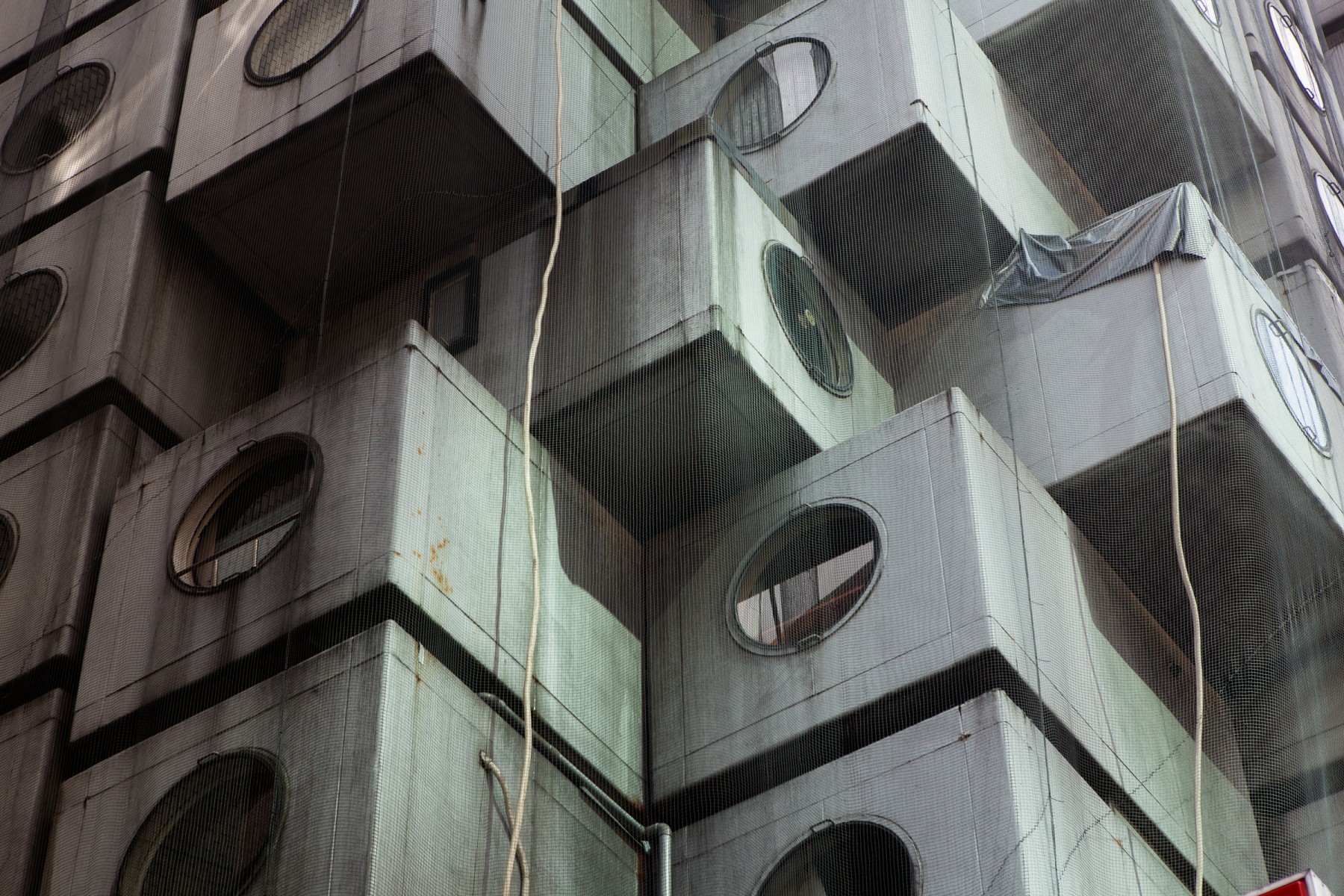 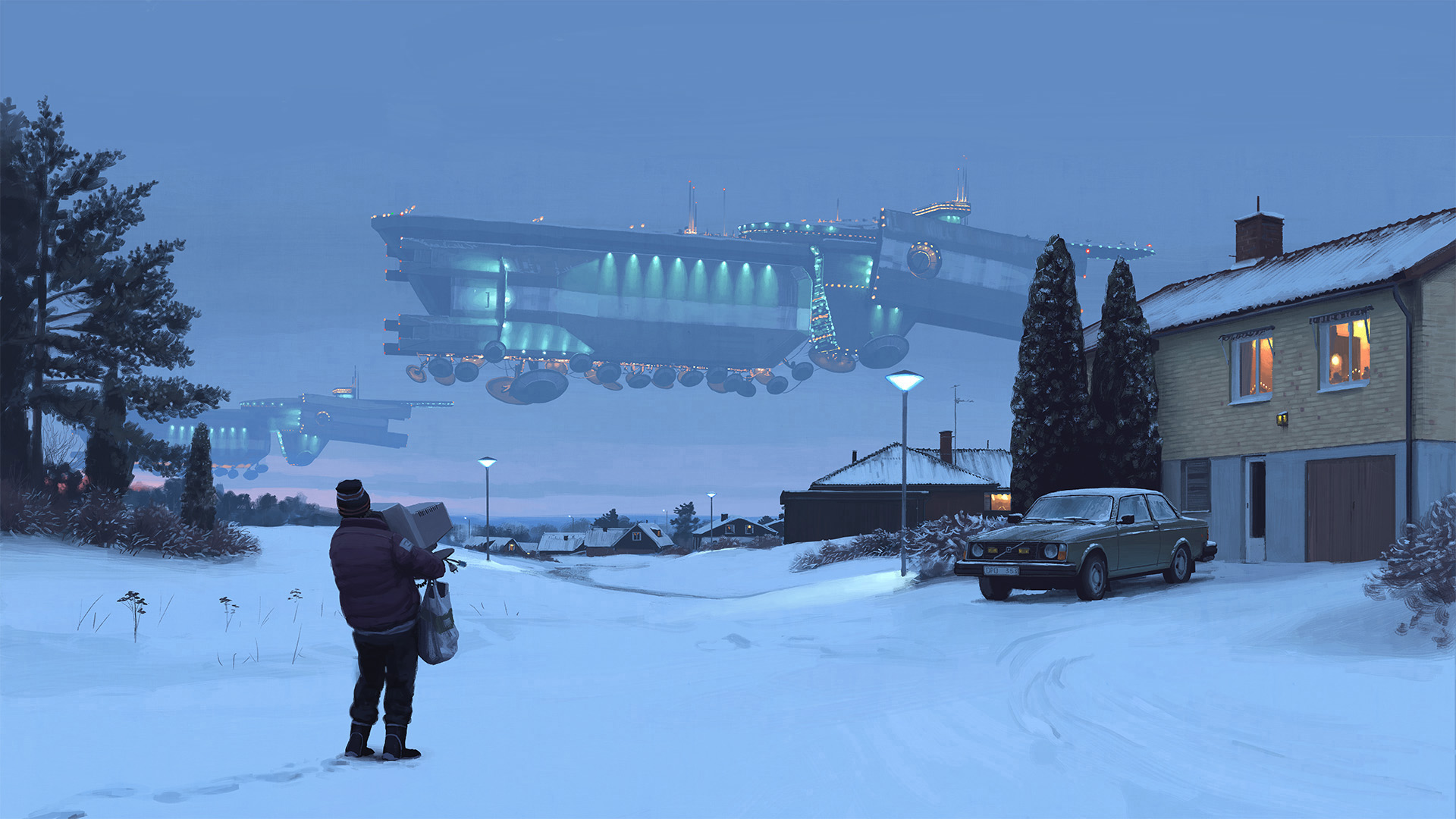 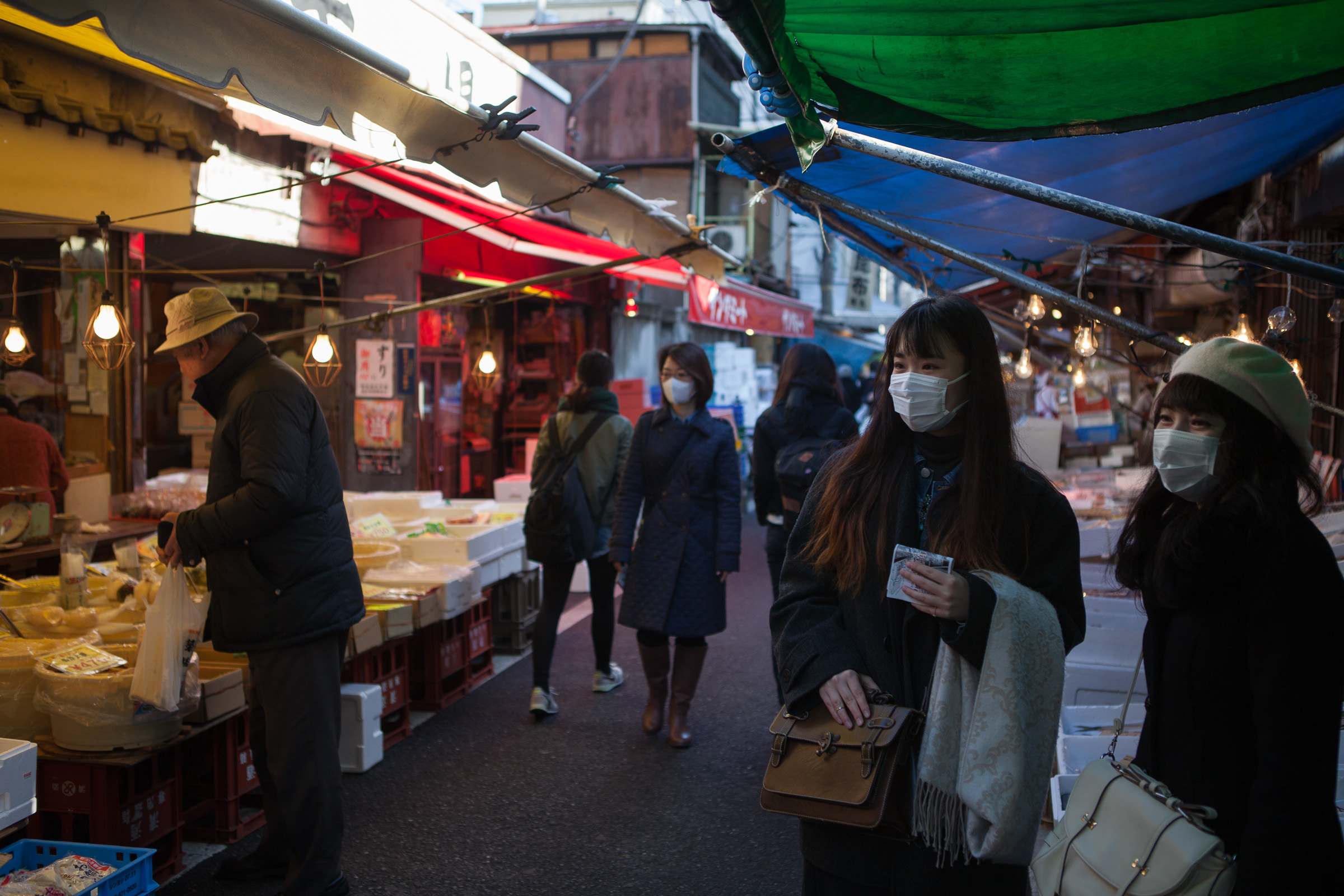 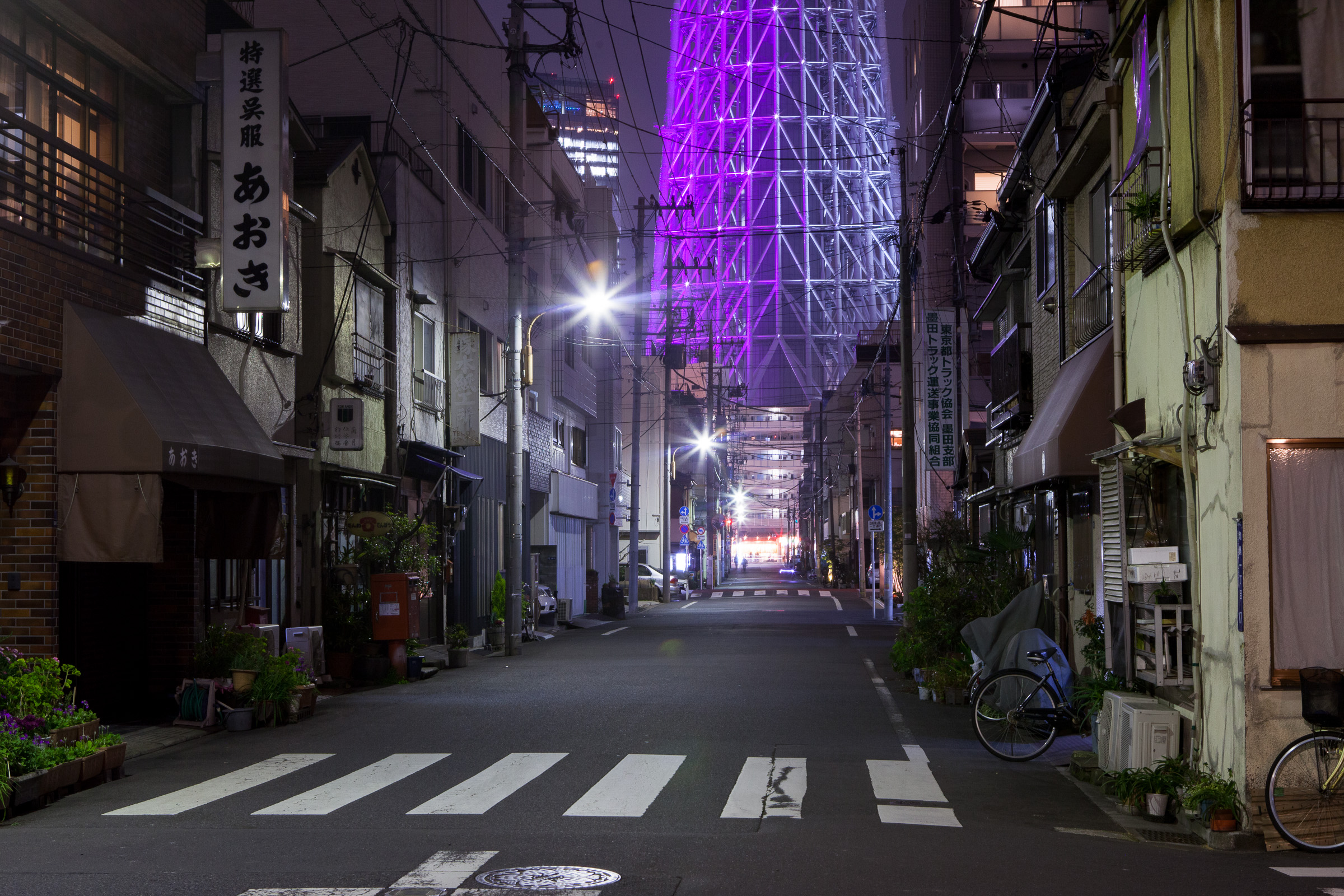